Fun Facts About The Muppets

Thanks to all of you Muppets lovers out there, The Muppets is #1 at the box office for familiy films! Hopefully this means that we will be seeing a sequel in the near future from the same talent that brought us The Muppets. If you haven’t gotten the chance to see The Muppets yet, I really hope you will! I have been telling anyone who will listen all about the movie, and even got some of those that were skeptical excited for the new movie. Remember that this is a family film; everyone will love it!

I wanted to share some fun facts with you about the new The Muppets film. We hope you enjoy them, and that they bring a huge smile to your face! 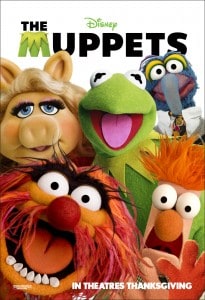 MANY MUPPETS — More than 120 Muppets appear in the film.

STEPPIN’ OUT – The film tapped 60 dancers to perform with Jason Segel and Amy Adams for the “Everything’s Great” opening musical performance.

PRETTY PIG — A total of 12 different costumes were made for Miss Piggy—more costume changes than any other actor in the film.

SO BIG — The largest Muppet, Thog, stands over 9.5 feet tall and is 4 feet wide.

TOP TEACHER – Amy Adam’s character Mary is a teacher with 16 students. Thus, no less than 16 perfect apples sit on the edge of the stellar teacher’s desk.

AT THE HELM — Director James Bobin makes his film directorial debut. Bobin co-created HBO’s “Flight of the Conchords,” which he wrote, directed and executive produced.

CUE THE MUSIC — Bret McKenzie of “Flight of the Conchords” wrote and produced three original songs and served as music supervisor for the film.

ALL IN THE FAMILY — Choreographer Michael Rooney is the son of Mickey Rooney, who appears in the film in a cameo role. This is the first time the two have ever worked together on a film.

MINI ME — Muppet versions of Gary/Jason Segel and director James Bobin were created. 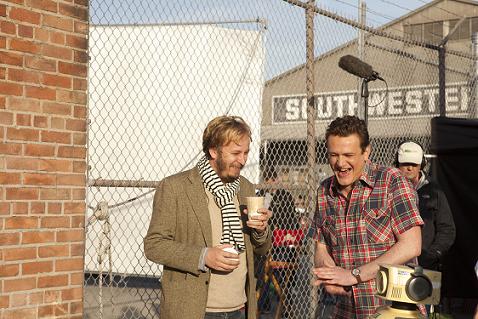 IT’S ALL ABOUT THE ACCESSORIES

HIGH FASHION — Miss Piggy had shoes made for her by Christian Louboutin and a dress by Zac Posen, which she wears in the finale scene.

FANCY DUDS — Kermit had a suit made for him by Brooks Brothers for the scene where he walks through the streets of Paris with Miss Piggy.

TIME WILL TELL — Walter wears a Kermit watch in the film.

TICKLING THE IVORIES — Rowlf’s original piano is back—incorporated into the Muppet Show orchestra.

STRUMMING THE SAME STRINGS — Kermit uses the banjo from 1979’s “The Muppet Movie” during the “Rainbow Connection” performance in Disney’s “The Muppets.”

SEEING GREEN – Disney’s “The Muppets” was a green set (in more ways than one) with an environmental steward who made sure the proper recycling receptacles were utilized on set. All of paper products were made from recycled materials and were compostable. The production also provided each crew member with aluminum refillable water bottles to cut down on the use of plastic bottles and paper cups. Water was readily available on set for cast and crew to fill their personal water bottles.

MAKING MUPPET STUDIOS — The Muppet Theater, built on Stage 28 on the Universal Studios Lot, incorporated parts of the old “Phantom of the Opera” set into its audience section.

TRICKY TOUR — Walter’s tour through Muppet Studios actually went through The Jim Henson Company on La Brea, Crossroads of the World on Sunset Blvd., the outside of Stage 3 on the Disney Lot in Burbank, two soundstage sets on the Universal Lot (Kermit’s Office and the Muppet Theater interior).

SIGNATURE ARCHES — A set design replicating the arches from the opening title sequence of “The Muppet Show” was recreated and used in the Muppet telethon.

RIBET – Kermit the Frog first appeared on “Afternoon, Footlight Theater” and “Sam and Friends” in 1955.

PROMINENT PIG – Miss Piggy first appeared in the chorus on “The Herb Alpert Special” in 1974.

MAKING HIS DEBUT — Walter was a character conceptualized by Jason Segel specifically for Disney’s “The Muppets.”

THE GREAT – Gonzo first appeared in “The Great Santa Claus Switch” as the Cigar Box Frackle in 1970.

WOCKA WOCKA – Fozzie first appeared on “The Muppet Show: Sex and Violence” in 1975.

TOP DAWG – Rowlf first appeared on for a Purina Dog Chow commercial in 1962.

HECKLERS — Statler & Waldorf first heckled on “The Muppet Show: Sex and Violence” in 1975.

STAR-SPANGLED — Sam the Eagle first was offended and appalled by the Muppets on “The Muppet Show: Sex and Violence” in 1975.

PRE-HEATED — The Swedish Chef kicked off his cooking career on “The Muppet Show: Sex and Violence” in 1975.

RAT-A-TAT — Rizzo the Rat originally appeared as an uncredited vermin in “The Muppets Musicians of Bremen” in 1972.

IT’S ELECTRIC — The Electric Mayhem, including Dr. Teeth, Animal, Janice, Floyd and Zoot, launched their legendary career on “The Muppet Show: Sex and Violence” in 1975.

*I was not compensated for this post. All thoughts and opinions expressed are my own.*