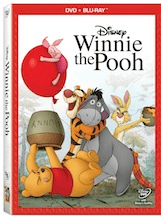 I simply cannot remember a time in my life when I didn’t know about Winnie the Pooh and his friends in the Hundred Acre Woods. Even as a teenager, I never lost my attraction to them, and proudly wore shirts featuring the characters and began collecting plush versions of them when I visited Disneyland as a junior and senior in high school while on choir tour.

It was an honor to be able to go to Los Angeles in June this year to be able to see a special screening of the 2011 release of Winnie the Pooh. Since I’ve already written a review of the movie, you can read what I thought about it here.

I knew that Winnie the Pooh was a movie I had to add to my Disney DVD collection. Disney films are always a great joy to watch at home, over and over again. I was eager for this one to find its way to my mailbox so I could share the movie experience with my 3-year-old daughter. While in Los Angeles, I also acquired a new Tigger plush and a Winnie the Pooh plush, and Zoe became very attached to both of them. We’ve had a few baby clothing items featuring the beloved characters, but it wasn’t until she held them in her arms that they became so real to her.

I popped in the Blu-ray DVD the same night it arrived, and sat Zoe down with me to watch it. I had so much fun watching her reactions to the film. She doesn’t have a very long attention span, but this movie is the perfect length for someone of her age with little patience. Her eyes were glued to the screen the entire duration of the movie, and she asked for more once it was over. The “silly old bear” was a huge hit with her, and she has asked to watch it multiple times since the first time.

Bonus Features are always a fun treat with any movie that I decide to add to our extensive collection. Since I got to meet the directors, producer, and a few of the animators that worked on this film, Winnie the Pooh holds a very special place in my heart.

Bonus Features on the Disney Blu-ray and DVD combo pack include:

Aside from now having my very own copy of “The Ballad of Nessie”, the informative “Winnie the Pooh and His Story Too” was my favorite Bonus Feature. It runs just under 9 minutes, and is a really creative way to tell the background of A.A. Milne (author of Winnie the Pooh stories and poems) and how Walt Disney became involved with the featurettes.

In the movie, Pooh interacts with the narrator, and his story literally comes off of the pages of a book. This Bonus Feature uses that same technique, making it a very fun way to learn about Winnie the Pooh’s origins.


*I did not receive any financial compensation for this review, though I did review a sample of the product for evaluation purposes. The opinions are based only on my experiences with the product.*