Shawn Levy was full of energy and bright smiles when he walked into the room at the Beverly Wilshire Four Seasons to talk with us about Real Steel, Hugh Jackman, Dakota Goyo, music, and directing robots.

Shawn Levy became involved with the Real Steel film when Executive Producer Steven Spielberg called him directly. “It was him and his partner Stacey Snider. They had this script they wanted to make, a different kind of robot movie. They wanted to do something that was kind of unembarrassed about being warm-hearted…Nowadays, so many movies are either pure action or without any emotion, or there’s kind of like that Too Cool for School cynicism,” the director of Date Night and The Night at the Museum shared with us. 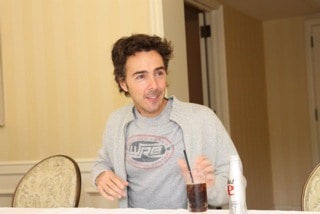 Real Steel focuses on the relationship between Charlie Kenton (Hugh Jackman) and Max Kenton (Dakota Goyo), set in 2020 several years after robot boxers forced human boxers out of the ring because audiences wanted grittier fighting. “I don’t even really think of the movie as an action movie. I kind of think of it as a father-son movie more than anything else.” Real Steel is full of loud and colorful boxing matches, but it is the relationship between Charlie and Max that will truly captivate the audiences.

“For Hugh to play a father being mean to a kid was very uncomfortable for him. And he kept saying, I don’t know. I’m like, trust me because…when this guy breaks at the end, when you finally hug that boy at the end…it will work because you’ve earned it.” At the beginning of the film, Charlie and Max are strangers to one another, and he treats the boy poorly, even though he recently lost his mother. “Hugh brought it…I haven’t seen that level of softness from him on screen.”

In addition to a great lead actor, Levy also needed to find a child actor that brought a little more to the role than just good acting. “I needed a kid who could act. I needed a kid who could be authentic…like, that thing that Ricky Schroeder had in ‘The Champ’, where that face just kind of shatters you…” Levy said of their search to find the right person for the role of Max.

“When I met Dakota, and I saw Dakota with Hugh…he was good at the lines, but it was what he did when he wasn’t talking that felt authentic. His face, that’s why I improvised that line when Hugh says, are you kidding me with those eyes?” Dakota Goyo’s magnetic blue eyes add a lot of unspoken emotion into his part. Not only can he act, but he expressed what he was thinking and feeling through more than just the words that were scripted for him.

Music played an important part in the production of the movie as well. “I play music on set when I’m shooting…music just kind of gives [the actors] the feeling you want without it being cluttered with words that get them in their head.” The song that is heard at the opening of the film is called “All of My Days” and is by music artist Alexi Murdoch. It is the first clue that Real Steel will be a different sort of robot movie. Levy discovered it 2 years ago while in a yoga class, and knew it was the song he wanted for the opening of his movie.

At the advice of Steven Spielberg, Levy had robots built to scale so that the actors could work with them directly. For Levy, the robots were just as real as the human actors. “You end up viewing them as real. I mean, honestly, by the third week, I would go, Dakota, do it this way. Hugh, you’re stepping on this line…and I knew that Atom was puppeteered, but I directed him like another character…”

“As soon as I saw how the puppeteers could move him, like you would stand there and he’s…way up there and he’d kind of shadow you. You could be 10, you could be 42, you could be 62, there was like a magic to that robot. And the reason that the scenes between Dakota and the robot are so wondrous is because that boy Dakota, he loved that robot.” 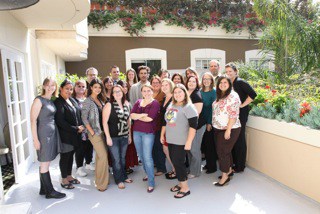 3 of Shawn Levy’s daughters were extras in Real Steel. At the beginning of the film, they interact with Hugh Jackman and want to take pictures of his robot, Ambush.

Levy’s youngest daughter referred to Hugh Jackman as her boyfriend at school. On her 4th birthday, Jackman called her to wish her a happy birthday.

Without the technology that was first used in Avatar, Real Steel could not have been made.

Levy’s daughters felt that their father was making a “boy movie”, but when they finally saw it, they fell in love with Atom and genuinely started to care what was happening in the film. They later took it back and said it wasn’t just a movie for boys.

*Disney/DreamWorks provided me with an all expenses paid trip to Los Angeles for an advance screening of Real Steel and the opportunity to speak with the talent behind the movie. All opinions expressed are my own.*