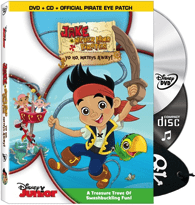 On September 27th, you can bring home Disney Junior’s #1 preschool series, Jake and the Never Land Pirates for your little buccaneer. The DVD, called Yo Ho, Mateys Away!, is a 2-disc combo pack that contains 7 episodes of the hit show, a music CD featuring 7 songs, and a pirate eye patch so your little one can feel like a part of the show.

We do not have cable, so I have never seen this super popular show until it arrived at my door. Zoe loves the 1953 Disney version of Peter Pan, so I knew she would enjoy seeing two familiar characters, Captain Hook and Mr. Smee, engage in further shenanigans in Never Land.

Jake, Cubby, and Izzy, along with their parrot sidekick Skully, are young pirates who live on Pirate Island and are constantly up against the infamous Captain Hook. They have their own ship, Bucky, and a super cool hideout, and all the smarts needed to thwart Captain Hook. Peter Pan would most definitely approve of this band of pirates!

Jake and the Neverland Pirates is most popular for boys in the age group of 2-5, but my daughter was instantly captivated by what was going on in the show. Jake, Cubby, and Izzy speak directly to the audience, so the kids participate by counting gold doubloons, solving puzzles, and singing the pirate songs. This is a show that I can’t imagine any parent would disapprove of; Jake and his friends talk about doing the right thing (when they find Captain Hook’s hat, Jake says they should return it because it’s the right thing to do. Even though they know Captain Hook wouldn’t return anything of theirs that they lost, they still play fair.) and work together to solve puzzles, like getting into Captain Hook’s treasure cave to take back a stolen treasure box.

The pirate songs you’ll hear in this show were written by Loren Hoskins and Kevin Hendrickson (they are Sharky and Bones of The Never Land Pirates Band), who appear as cartoon characters in the second half of each episode, and then as themselves dressed in pirate clothing and singing as the end credits roll. The songs are catchy and upbeat, and parents might even find themselves tapping their feet and singing along (it’s really hard not to!).

I really wish I had the Disney Channel so that I could keep up with Jake and his friends as they go on adventures, use pixie dust to get out of tough situations, and make a fool of Captain Hook! If you haven’t seen this show before, it is definitely worth adding to your Disney collection.

Disc 1 also contains a couple of fun Bonus Features that parents and kids will both love, including “Pirate Party” music videos, a sing along, and how to talk like a pirate.