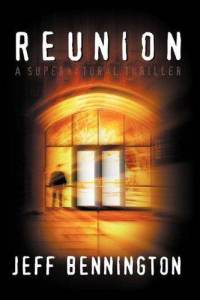 18-year-old David Ray never stood a chance. He had been abused all of his life, teased relentlessly by his classmates, and had no hope for a better future. One morning he walked into his school cafeteria and shot and killed 8 students and wounded many others before finally putting a bullet in his own head.

Crescent Falls High School closed for good after the tragedy that occurred within its walls. 20 years later, Maria Vasquez, a survivor of the shooting, decides it is time for a class reunion. She gets in contact with 5 of the other survivors, and they agree to have a first ever reunion–inside the school where the shooting took place.

Nick believes that the spirit of David Ray is haunting the school, but no one believes him. Once the remaining survivors enter the school building, no one is safe. Who will survive a second massacre?

Jeff Bennington’s Reunion sounded utterly chilling when I first read the synopsis, and I had high hopes when I started it. However, after just one chapter I knew it would be a struggle to finish. As promising as the plot is, Reunion is very poorly edited, even though two editors are acknowledged on the copyright page. I found plenty of grammatical and spelling errors, improper use of punctuation, and even wrongly capitalized words. The plot itself really is not bad, but the lack of editing ruined the reading experience for me.

Reunion has quite a few characters, each with their own back story and unique personalities. Everyone was easy to tell apart, and I was almost equally interested in all of their stories. It was hard to really get to know the characters because there were so many. I was most interested in the relationship between Lana and Noah. Everything worked out for them the way I had hoped it would, except far too quickly, and just to wrap up the story.

Bennington is a good storyteller, but I cannot call him a good writer. His plot was compelling, some of the characters were worthy of being liked, and he introduced an intriguing twist that I did not see coming. Unfortunately he lacks in technical skills, and the book fails as a whole because of it. Perhaps with better editors, a different publisher, and a few writing courses Bennington will produce a higher quality novel someday.