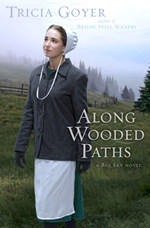 All she wanted was a simple Amish life . . . But now Marianna Sommer finds herself depending on Englisch neighbors. Although proud of living apart from the world, she and her newly relocated Amish family have discovered that life in the remote mountains of Montana requires working together.

As Marianna begins helping those different from herself—and receiving their help—her heart contemplates two directions. She’s torn between the Amish man from Indiana whom she has long planned on marrying and the friendly Englischer who models a closer walk with God than she’s ever seen before.

Who should have young Marianna’s heart? What is God asking her to sacrifice? Her traditions? Her community? The answer is found along the wooded paths.

Find out about book 1, Beside Still Waters.

Tricia Goyer is the author of thirty books including Songbird Under a German Moon, The Swiss Courier, and the mommy memoir, Blue Like Play Dough. She won Historical Novel of the Year in 2005 and 2006 from ACFW, and was honored with the Writer of the Year award from Mt. Hermon Writer’s Conference in 2003. Tricia’s book Life Interrupted was a finalist for the Gold Medallion in 2005. In addition to her novels, Tricia writes non-fiction books and magazine articles for publications like MomSense and Thriving Family. Tricia is a regular speaker at conventions and conferences, and has been a workshop presenter at the MOPS (Mothers of Preschoolers) International Conventions. She and her family make their home in Little Rock, Arkansas where they are part of the ministry of FamilyLife.

For more about Tricia and her other books visit www.triciagoyer.com

Read an excerpt of Along Wooded Paths.

Along Wooded Paths mainly focuses on Marianna’s indecision about which man she wants to be with. Does she want Aaron, the Amish man who she has had feelings for since she was young? Or the dashing Englischer, Ben, who makes her pulse race and who she feels a deep connection? The reader is thrown back and forth between Marianna trying to decide which man she wants. Both men want to be with her. Aaron actually comes to Montana from his home in Indiana to try and win over Marianna, but gets in a car accident upon his arrival. He is laid up in Marianna’s home recovering for most of the book. When he arrives, Marianna realizes just what a bind she is in.

To me, the decision would have been to follow my heart and be with Ben. But I am not Amish like Marianna and she is torn between following a path that everyone will approve of and she won’t have to leave her faith and her family. It would mean a HUGE sacrifice for Marianna to be with Ben and I knew she wouldn’t be with despite her strong feelings for him.

My favourite parts of the novel were when Marianna was helping out a young unwed mother, Jenny and her child, Kenzie. It was neat to view Jenny’s home and the ways of the Englisch world through Marianna’s eyes. The Amish live a much simpler life than us and things we take for granted and don’t even notice like a television in the background or music on the radio is foreign to them. I was touched by Marianna’s generousity and compassion towards Jenny and how she didn’t judge her for being different than herself.

I did find the book a little slow in parts especially where Marianna was trying to decide which man she wanted to be with. Did I have sympathy? Maybe a little because I know it was a hard spot to be in. However, there are people who have no one and she is lucky that she has two suitors that wanted to be with her.

The book ended on a little bit of a cliffhanger and I’m excited to see what happens in Book 3, Beyond Hopes Valley. If you are a fan of Amish Fiction, give these novels a try- they are good!


Come to a Facebook Party and Live Author Chat!

Tricia is celebrating the release of Along Wooded Paths with a Fabulous Facebook party on October 18th. She’ll be giving away prizes and a sneak peak at the next book in the Big Sky series.

Then during the second half of the party she’ll be hosting a LIVE AUTHOR CHAT on her website and announcing something BIG! CLICK the button (below) to RSVP for the party – then go here to sign up for the Live Author Chat.