One of the many reasons I am proud to call Utah “home” is because Utah breeds so much talent. On just one finger, I can rapidly list off several bestselling authors that also call Utah home. One of the most well-known and beloved authors that resides in Utah, Richard Paul Evans, had the Launch Party this evening for his first YA novel, Michael Vey: Prisoner of Cell 25. Dawn Ryan, a publicist for Simon & Schuster, was kind enough to send me an ARC for review. I read and devoured it in about 2 days as time permitted. (You can read the review here.) 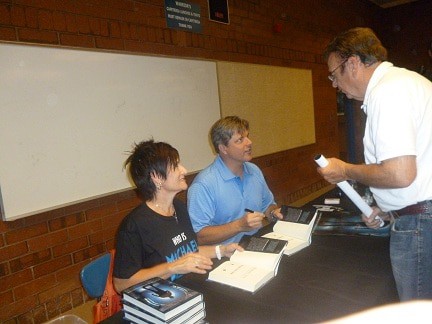 I’ve actually been wanting to see Mr. Evans in person for quite some time; I reviewed Promise Me last year around Christmas and just fell in love with his writing. Evans achieved incredible success after writing The Christmas Box, which was then turned into a CBS TV movie that won an Emmy Award.

Tonight’s Launch Party was held at Taylorsville High School, and it was already packed with people waiting to meet the famous author when I arrived at 5:50. The Layton Barnes & Noble was at the event selling copies of Michael Vey for excited readers. I couldn’t resist buying a copy for myself, even though I’ve already read it. When we walked into the gym where the signing was taking place, people were handing out Monkey bars (these are banana-flavored ice cream bars; read the book, and you’ll learn the significance for bananas to some of the characters), characters right out of the book were walking around, and booths were set up with free hand outs. A DJ played music to keep everyone entertained, and people in lab coats stood at displays to demonstrate electricity to the passersby. 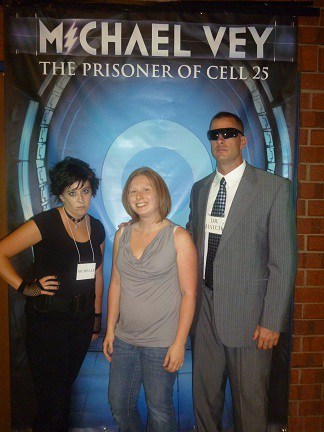 (I’m in the middle, on your left is “Nichelle”, one of the electric children in Michael Vey. On your right is Dr. Hatch, who runs Elden Academy and wants to get Michael and Taylor in his clutches. It just figures I’d seek out the bad guys, doesn’t it? I really loved these two characters!)

I didn’t stay very long at the event because of the music and Zoe’s sensitivity to all things too loud (according to her loud-o-meter), but I was there long enough to snap some pictures, mingle with some of the characters, and get my books signed by Mr. Evans himself. I have to say this was the coolest book signing/Launch Party I have EVER attended. Just one of the perks of living in the same city as a beloved author!