I love Hugh Jackman movies, so I am very excited for DreamWorks’ Real Steel, which will be in theatres every October 7, 2011. When I was in Los Angeles in June, this was one of several previews that was shared with us (the trailer was already out and I was fully aware and excited for this movie!). 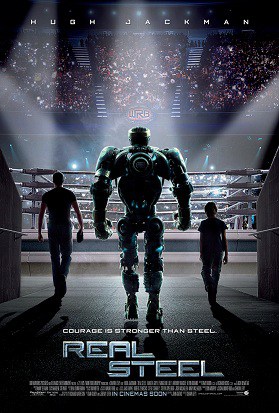 I know a little bit more about this movie now; the director of Real Steel, Shawn Levy, also directed movies such as The Pink Panther, Night at the Museum, and Cheaper by the Dozen. From the looks of it, Real Steel is going to be a bit more serious–and full of awesome special effects and action scenes.

Hugh Jackman stars as Charlie Keaton, a former boxer, and now promoter for robot boxers in a futuristic setting. He reconnects with his 11-year-old son, and together they help a battered and discarded robot set out to become a champion. 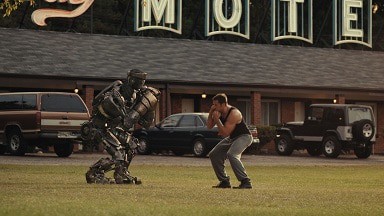 What struck me about this movie when I first saw previews were the slight similarities to the intelligent robots in Will Smith’s I, Robot and Haley Joel Osment’s A.I–and maybe just a little bit of Rocky in there, too! Futuristic setting, robots who are practically humans themselves, and a great cast (Hugh Jackman and Evangeline Lilly of LOST) equals the perfect movie for me!

Check out this featurette on Real Steel and mark your calendars for October 7th!!