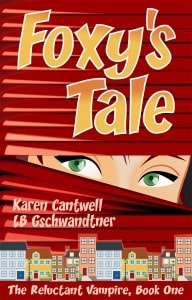 Foxy Anders and her teenage daughter Amanda are starting their lives over thanks to Foxy’s now ex-husband’s cheating ways. They relocate to Washington, D.C., where Foxy intends to open a shop and lease out a few rooms to pay for her exorbitant shopping habit. Meanwhile, Amanda is hating life–and her mother–so she begins a blog with the sole intent of using it to complain about Foxy. Life for Amanda starts looking up when she meets Nick at school, a cute guy who reciprocates her feelings.

Luckily for Foxy (and her wallet), she immediately finds two tenants to rent the available rooms: Myron Standlish is a mysterious foreign man who has tons of money and strange habits, and Knot Knudsen is a very openly gay man with terrific cooking skills and a knack for selling the antiques in Foxy’s store. Myron becomes especially interested in an old trunk that Foxy has for sale, as well as other things that might lurk in hollow walls in Foxy’s residence.

Authors Karen Cantwell and LB Gschwandtner partnered up in writing Foxy’s Tale, a lighthearted and sometimes funny vampire novel. I was intrigued by the idea of a “reluctant vampire” and the promise of romance, paranormal, and chick-lit all rolled into one. Foxy’s Tale was definitely entertaining, but overall it fell short of my expectations.

Foxy’s Tale opens with Myron in 1851 in Prussia, searching for his father and a trunk. Unfortunately for Myron, he finds neither, and the search continues for centuries–when he becomes Foxy’s tenant. Though I felt I read the book carefully, I never quite grasped why Myron was so intent to find his father. What did he want from his father? What was he expecting to find in the trunk? I would have liked to see more development regarding this subplot.

Foxy is incredibly shallow, but at times she comes across as well-meaning. After she takes a trip to Palm Beach for an antique show, she undergoes a really huge change. She becomes less obsessed with shopping and finding a new man to take care of her, and begins focusing her efforts on her neglected teenage daughter, Amanda. When she returns from Florida, it’s as if she is a new woman. Foxy changes just a little too quickly for me, and Amanda immediately forgives her.

Amanda’s blossoming relationship with Nick introduces part of the supernatural element in this book, but it happens all at the same time. I would have preferred seeing some kind of build up to the paranormal characters and events, but it’s all dumped onto Amanda and the reader with little lead up. At least with Myron, the reader knows he is an immortal of some kind, and possibly a vampire, because Amanda finds bags of blood in his apartment and never sees him eat anything. She just shrugs off his excuses, but it would have been more fun if she’d pursued investigating him and made him a subject in her blog as well.

This brings me to Amanda’s blog, which we only get a few peeks at throughout Foxy’s Tale. I loved that she wrote in a blog as an outlet for her anger, and it could have really added more flavor to the novel. I was honestly hoping that Amanda would be a sort of Nancy Drew or Harriet the Spy type character, and that the reader would get a lot more meat to the story because of her blog.

I appreciated the authors’ efforts with Foxy’s Tale, but I’m debating whether or not I have enough interest in the characters and the story to continue with the next installment. While reading, I also found a few grammatical, spelling, and punctuation errors that pulled me right out of the story. Though not every reader notices these types of things, some might find it really distracting.