Meet Winnie the Pooh and Tigger, Too! | An Interview with Voice Actor Jim Cummings

As a kid, I didn’t pay much attention to the people behind the cartoon characters that I enjoyed watching so much. It was only as I grew older that I began to realize that there were such things as voice actors and actresses who breathed life into those beloved characters. I mean, I knew the cartoon characters weren’t real, but I just never gave much thought to it that people could make a living and a career doing this. 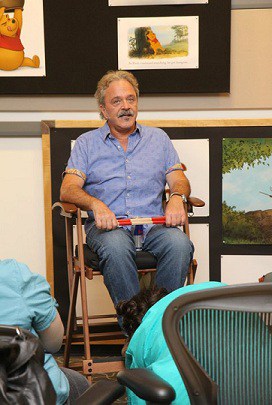 I loved Darkwing Duck growing up, but I didn’t know that Darkwing Duck was voiced by Jim Cummings (aka Winnie the Pooh/Tigger) until I started looking up information on him before leaving for Los Angeles. The more I looked into his past credits, the more I realized that I not only liked this man, I LOVED this man! His most recent voice acting that I’d seen was Ray, the lovestruck lightning bug, in Princess and the Frog. Ray was so innocent and sincere, and I still cry every time we watch Princess and the Frog. Going back even further than Ray and Darkwing Duck, Jim Cummings provided the singing voice of Rasputin in WB’s Anastasia for my all-time favorite villain song, “In the Dark of the Night”.

In regards to the Winnie the Pooh franchise, Jim Cummings has been providing the voice of Winnie the Pooh and Tigger since 1987. He is now the third voice actor for the character of Winnie the Pooh. Jim is a child at heart, but he takes his work very seriously–and he’s incredible at it. I was dying most to know if he was recorded separately for the voices of Tigger and Winnie the Pooh, or if he switched back and forth, basically have a conversation with himself.

“You know I get that a lot and I’ve gotta tell you I have never thought about it. Probably if I did I’d be doomed. But, you know, I was always the kid — see this — that’s why this is the best job in the world for me. I was the kid that always got kicked out of class for doing the stuff that I’m making a living out of,” he explains. For Jim, it just comes naturally. The entire time we spent with Jim, we saw a first hand demonstration of his talent, and the ease with which he can slip in and out of character voices.

When asked if his work followed him home, Jim said, “I don’t think you really turn it off… when my eldest was…about five I’d just gotten a job for Disney as Pete…you know, the guy that’s always beating up either Donald Duck or Goofy or somebody…So I’m sitting there and I’m reading to my daughter the Three Little Pigs…and she sat and she goes dad, I’m really tired, could you just read the story and not do the voice?” Story time at bedtime would have been my favorite part of the day!

My favorite anecdote that Jim shared with us was about what happened when one of his daughter’s classmates brought a talking Winnie the Pooh doll to school. “I do all the voices for the dolls, you know, like the scratch and sniff Pooh…unfortunate label there…So next week needless to say I was Show and Tell and so that was kind of cool.”

*Disney provided me with an all expenses paid trip to Los Angeles to attend a screening of Winnie the Pooh and to meet with some of the cast and crew. All thoughts expressed are my own.*