If there is one thing I have learned about seeing movies that are adapted from books, it’s to never re-read that book directly before seeing the movie. Unfortunately, Hollywood doesn’t always get it right with adaptations. I love movies, and I love books. It’s hard to say which I love more because it’s like comparing apples and oranges. 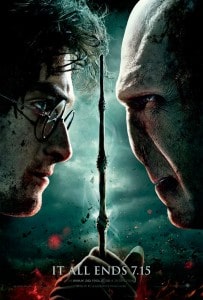 July 15th was a huge day for millions of Harry Potter fans around the world as we saw a beloved movie franchise come to a bittersweet end. Many of the readers/viewers of the movies grew up with Harry, Ron, and Hermione, and it was like saying good-bye to their childhood. I was several years older than Harry and friends when I started reading the books, but I loved them all the same. I remember reading the first book and thinking, “yeah, ok. That was pretty good.” The first 3 books were already published when I started reading, so I quickly gobbled down the rest. By the end of Harry Potter and the Prisoner of Azkaban I was hooked and anxiously waited in line with hundreds of others at midnight release parties for the next books. I was even lucky to work at Barnes & Noble for two of the books’ midnight releases, and even requested specifically to work for the release of Harry Potter and the Deathly Hallows.

Do I even have to tell you that of course I watched each and every movie in theatres at midnight showings or advanced screenings? This is supposed to be a movie review, and here I am talking about the book when everyone else out there is talking about the movie. Ok, I’ll get on with it.

I was fortunate enough to see Harry Potter and the Deathly Hallows Pt. 2 in an IMAX theatre with 3D. I was going back and forth over whether the hike in the price of the ticket was worth it, but in my limited experience with 3D movies, this movie rocked! Some of the memorable scenes include: the dragon who guards the Gringotts vaults, the roller coaster-like experience viewers get taken on while traveling through the vault, and the battle between Hogwarts and the Death Eaters. Is 3D worth it? Yes, yes, and ohhhh, yes. I have never felt such a part of these stories until experiencing it like I was actually living it.

Jumping back to the book for a second…I didn’t re-read it before I saw the movie. Truth be told, the book was emotionally exhausting and draining for me, and I may never actually read it again. I have NEVER cried so much because of a book as I did with Harry Potter and the Deathly Hallows. I can’t tell you which parts were skipped or which lines were cut out (though Mrs. Weasley got in the one word I wanted to hear her call Bellatrix, which brought cheers and clapping all throughout the theatre!), but I can tell you that it was a solid movie, and I was left satisfied by its conclusion.

At the risk of getting a little too spoiler-y, I need to address all the Severus Snape lovers out there. Bring your tissues; you’re going to need them. There is a particularly emotional scene involving my favorite Potions professor, one in which we meet him as a child and see how he first met Harry’s mother. It’s absolutely heartbreaking. I just have no words for it.

Harry Potter and the Deathly Hallows Pt. 2 is incredibly well done. Couple the cinematography with the epic musical score, and this is a movie that will live on in the hearts of muggles forever.

*I received no financial compensation for this review. Opinions expressed are my own.*