Have A Laugh Volume 3 DVD Review 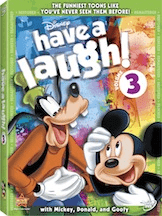 Title: Have a Laugh 3

My dad grew up in California, and has always been a great admirer of Walt Disney. During my childhood, I’d always catch my dad watching the Disney Channel when the least interesting shows were on, shows that now I find just as fascinating as he does.

Volume 3 in the Have a Laugh! collection contains 5 classic Disney short cartoons: Mickey’s Delayed Date, The Whaler, Chef Donald, How to Play Baseball, and Pluto and the Gopher.

In Mickey’s Delayed Date (1947), Mickey Mouse falls asleep in his chair and forgets that he has a date with Minnie Mouse. When Minnie calls Mickey from the entry to the dance where they were supposed to meet, she threatens to dump him if he doesn’t arrive in 15 minutes. Pluto keeps getting in the way as Mickey scrambles to get ready, but in the end, Pluto saves the entire date.

Mickey Mouse, Goofy, and Donald Duck try their hand at whaling in The Whalers (1938), only to have one thing after another go wrong. Mickey Mouse is having trouble filling a bucket with water, Donald Duck is trying to eat a sandwich up in the crow’s nest and it has hilarious consequences, and Goofy finds himself falling down the blow hole of the whale they’re trying to catch when trying to help Donald Duck.

Donald Duck tries his hand at cooking in Chef Donald (1941) when he follows a radio cooking program’s recipe for delicious waffles. But Donald makes a tiny mistake when he switches rubber cement for baking powder, and ruins the batter. Determined to make the waffles, Donald Duck fights the rubbery batter and gets tangled up in it.


In How to Play Baseball (1942), viewers are treated to a humorous look at every aspect of baseball from the uniforms to the pitches and how the game is played with Goofy as the star of the short. I’ve certainly never found baseball very entertaining, but if it were played the way it is in How to Play Baseball, I would definitely watch!

Pluto messes up Minnie’s flower garden in Pluto and the Gopher (1950) when he has a battle of wits with a gopher. Though it is the gopher that originally started the digging, Pluto gets scolded for it. The gopher ends up in Minnie’s house, and Pluto and the gopher have a hysterical showdown.

In Have a Laugh! Vol. 3, the shorts can be viewed in their original formatting, but they have also been digitally remastered for this DVD. The remastered shorts unfortunately cut out some of the most comedic parts of the cartoons, but they are worth watching just for comparison’s sake.

The DVD collection is a terrific way for parents and grandparents to connect with their children and grandchildren over timeless cartoons. The adults will appreciate the trip down memory lane, and the children love the modern look and sound to the cartoons.