John Lasseter, director of Cars 2 and Chief Creative Officer of Pixar, met with our group of mommy bloggers to talk sequels, family, and the future Disney California Adventure attraction, Cars Land (scheduled to open in the summer of 2012).

“In the case of our sequels…we don’t want to rehash the same thing. What’s so important to us in every Pixar feel is the emotional heart of the film…as we approach all of our sequels we want to take a look at the main character and what can he learn that’s different than the original?” said Lasseter when asked about the plot of Cars 2. The target audience of Cars has grown up, and likewise so has the world of Cars. Cars 2 brings back beloved characters and places them in more serious situations, with steady humor, lots of action, and an overall great story. 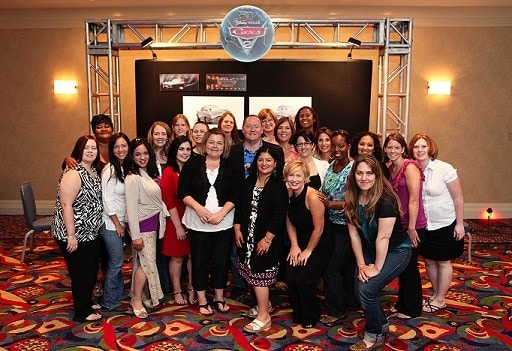 “My wife always said don’t make a movie for the first one someone sees it…make it for the one hundredth time a parent has to suffer through it on video,” Lasseter said generally of his movies. To date, Pixar has successfully kept both children and their parents entertain with each subsequent viewing of a movie; repeat parent viewers still notice new things in all their children’s favorite Pixar films every time they are played.

Mr. Lasseter’s wife has had a huge impact on what sort of things we see in Pixar movies. “My wife is very, very strong about having strong female characters…we have amazingly strong… women at Pixar and so that’s why I think all of the female characters like Jessie and Holley Shiftwell and Sally and Eve…are very…strong.” The first Pixar film featuring a strong female lead is scheduled for release in 2012.

When asked about the level of violence in the film, Lasseter said, “ I’m very conscience of the violence…I wanted it to be…for kids and for families.” A particularly violent scene was changed for the movie after several creative team staff members commented that it just didn’t feel right. Lasseter agreed with them wholeheartedly after viewing the scene again.

Though there are no current plans for a third Cars movie, the franchise will be kept alive in the newest addition to the California Adventure park, Cars Land. “ You gotta come to Cars Land…The quality of work that’s being done there, there’s a quaintness to it, it’s really like old school Disneyland,” Lasseter praised the new attraction. “You’re really gonna be transported to Radiator Springs. So if your kids or your readers kids love anything dealing with the Cars movie they’re gonna want to see this because it’s really, really spectacular and the level of detail is so phenomenal.”

*Disney provided me with an all expenses paid trip to Los Angeles to see Cars 2 and participate in interviews with the cast and crew.*