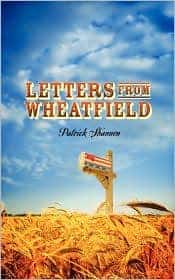 Letters From Wheatfield is precisely what you would expect: a charming, quaint, amusing look at life in the Midwest (is Montana the Midwest? Or the West? Well, you know what I mean…). The premise of the book is clever — a series of letters from two Montanans (who might be a little freer with the goings-on there, as they’re transplants from New York) to an author who is going to write about life in Wheatfield. The letters comprise the actual book…a neat idea that works quite well.

But it’s the substance of those letters; the cast of characters who comprise Wheatfield (a town of only 2,000), their quirks, their gossip, and their behavior that truly make Letters From Wheatfield work. It’s full of the sort of stuff that makes you shake your head and snicker.

Letters From Wheatfield, as cliché as it may sound, is a fun slice of Americana. It doesn’t matter that Wheatfield doesn’t actually exist — you’ll swear it’s a sleepy little town you’re familiar with…and people you know quite well.