Book Review | An Eye for Glory 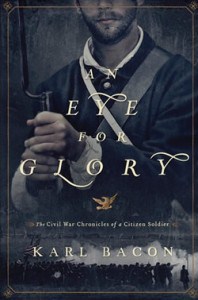 Title: An Eye for Glory: The Civil War Chronicles of a Citizen Soldier

Michael is a good man, a family man. But honor and duty push him to leave his comfortable life and answer the call from Abraham Lincoln to fight for his country.

This ‘citizen soldier’ learns quickly that war is more than the battle on the field. Long marches under extreme conditions, illness, and disillusionment challenge at every turn. Faith seems lost in a blur of smoke and blood … and death. Michael’s only desire is to kill as many Confederate soldiers as he can so he can go home. He coldly counts off the rebels that fall to his bullets. Until he is brought up short by a dying man holding up his Bible.

It’s in the solemn aftermath of the battle of Gettysburg that Michael begins to understand the grave cost of the war upon his soul. Here the journey really begins as he searches for the man he was and the faith he once held so dearly. With the help of his beloved wife, Jesse Ann, he takes the final steps towards redemption and reconciliation.

Using first-hand accounts of the 14th Connecticut Infantry, Karl Bacon has crafted a detailed, genuine and compelling novel on the 150th anniversary of the Civil War.

Intensely personal and accurate to the times, culture, and tragedy of the Civil War, An Eye for Glory may change you in ways you could have never imagined as well.

Karl Bacon is a first-time novelist and long-time student of the Civil War.  He and his wife, Jackie, live in Naugatuck Connecticut.

An Eye for Glory is the story of Michael Palmer as a manuscript written to his 3 children many years after the war ended.  Michael used journals he wrote during the war and letters to his wife to remember the painful and not so painful memories of the war so that his children could know what went on and pass it down through the generations.  This is a beautifully written and historical accurate account of what a soldier might have gone through during the Civil War.  It is a great read for any history lover and would definitely recommend it.  Karl Bacon is definitely a talented author, and I hope he writes many more historical fiction.  This is a great story of duty, honor, loss, forgiveness, and redemption.  Michael starts out thinking the other side is evil only to realize what he was doing to other men just like himself.  The confederates were humans with families and the will to survive just like himself.  Michael tells his story to his children about how he got past the hate and guilt of what he had done during the war.  It was a wonderful story about the historical battles, the 14th Connecticut Infantry, and Michael’s journey during the war and after.  This is a great novel for any interested in the Civil War.

Disclaimer: This book was provided for review for free. I was in no way compensated for this post. Everything written is my own thoughts and feelings. Thank you!

Heather is a full time mom of 2 little boys (so far). She spends her days reading, writing, blogging, playing under the sun while also being mother and wife. She loves her life with her family in beautiful Charleston, SC.