Gillian Bagwell is the author of The Darling Strumpet, a novel based on the life of Nell Gwynn, who rose from the streets to become one of London’s most beloved actresses and the life-long mistress of King Charles II. The Darling Strumpet will be published on January 4, 2011. For information about Gillian’s books, other articles, and links to the blogs of her research adventures, please visit her website, gillianbagwell.com. 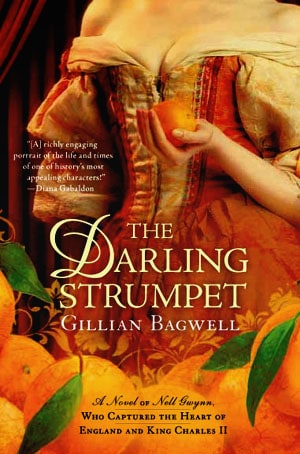 Twelfth Night marks the end of the Twelve Days of Christmas, and was the last night of the Christmas merry-making, in the days when people’s lives were governed both by church-related holidays (which word derives from “holy days”) and traditional pastimes.  If one begins counting on December 25, day number twelve is actually January 5, but Twelfth Night generally refers to January 6, the Feast of the Epiphany in the Christian calendar. 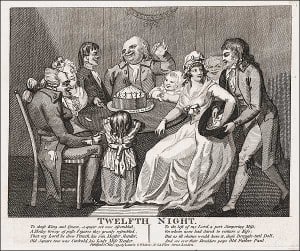 In England in centuries past, the Twelfth Night festivities typically included a Lord of Misrule.  There were various ways of choosing the Lord, but one of the most common was that a bean was baked into a cake, and whoever found the bean in his piece of cake became the Lord of Misrule, who presided over the evening’s feast and attendant silliness, his rule ending at midnight.  Sometimes a pea was also baked into the cake, and whatever woman found it became the Mistress of Misrule.  Sometimes the merry-makers were designated King and Queen.  On January 6, 1660, diarist Samuel Pepys wrote that after supper at a party he and his wife attended, “We had a brave cake brought us, and in the choosing, Pall was Queen and Mr. Stradwick was King.”

France and many other countries have similar traditions, and a King Cake, or Three Kings Cake containing little figures or trinkets are consumed around Christmas or at Twelfth Night.

The Lord of Misrule’s reign symbolized the normal order of things being turned upside down, and the tradition probably descended from pre-Christian festivals such as the Celtic festival of Samhainand the Roman Saturnalia.

Philip Stubbs’s Anatomie of Abuses, published in 1583, sourly describes the Lord of Misrule and his minions, who “strike up the Deville’s Daunce withall, and marche these heathen companie towards the church and church yarde, their pipers piping, drommers thunderyng, their stumppes dauncying, their bellies iynglyng [jingling], their handkerchiefes swyngyng about their heades like madmen, their hobbie horses and other monsters skyrmishyng amongst the throng: and in this sorte they goe to the churche (though the minister bee at praier or preechyng) … like devilles incarnate, with suche a confused noise that no man can heare his own voice.  Then the foolishe people, they looke, they stare, they laugh, they fleere, and mounte upon formes and pewes, to see these goodly pageauntes, solemnized in this sort.”

Another tradition associated with Twelfth Night in the England of long ago was the drinking of wassail, a hot punch of ale mulled with sugar and nutmeg, and “wassailing,” when people went from house to house singing, bearing a wassail bowl.  The households they serenaded were obliged to welcome them in, drink from the bowl, and reward the carolers with little gifts of money.  The addition of little roasted crab apples, which split to reveal a fluffy white interior, turned wassail into “Lamb’s wool.”

Shakespeare’s play Twelfth Night, with its spirit of confusion and topsy-turvy frolics, was written to be performed as a Twelfth Night entertainment.  It could be argued that Sir Toby Belch is a kind of Lord of Misrule, with his inamorata Maria as the Mistress of Misrule who assists his orchestration of mischief. The earliest known performance of the play took place at Middle Temple Hall (Middle Temple being one of the Inns of Court where lawyers were trained and had their chambers), on Candlemas night, 2 February 1602. Candlemas was traditionally the true end of the ecclesiastical Christmas season, when the holly and ivy that had decked the halls was to be taken down.

In “Ceremony Upon Candlemas Eve,” the seventeenth century poet Robert Herrick (author of the famous line “Gather ye rosebuds while ye may”) wrote:

“Down with the rosemary, and so

Down with the bays and mistletoe;

Down with the holly, ivy, all,