Book Review | Friend Is Not A Verb 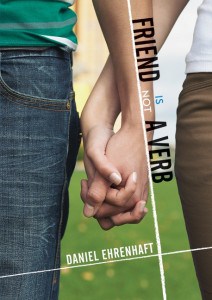 Title: Friend Is Not a Verb

What happens when you are a sixteen-year-old boy whose been dumped by your girlfriend, kicked out of your band, trying to live with your crazy parents as well as dealing with a sister who literally has dropped off the planet? Welcome to the life of Henry (Hen) Birnbaum in Friend is Not a Verb by Daniel Ehrenhaft.  Hen has to deal with the same issues that face many sixteen-year-olds. He is plays the bass (badly, as he would say himself), his sometimes-girlfriend is the lead in the band, he has a female best friend who tries to keep him focussed and he spends time racking his brain trying to figure out why his sister ran away and if she is ever coming back. Then, just as he seems to be falling into a rhythm of life….he learns his sister has returned and his world is turned upside-down once again.

When Hen’s sister, Sarah, returns after a year away, she brings back her friend Gabriel Stern as well as a truck-load of secrets that she doesn’t want to share. Hen latches on to Gabriel (who is still in hiding and loves to play guitar) when Gabriel offers Hen some lessons. Hen notices a manuscript about Gabriel’s life so he takes a copy with him in hopes of learning what the truth about Sarah’s year away. Hen learns that his parents actually knew where Sarah was the entire time (and even went to visit) but never told him anything. Despite his examination of the manuscript, Hen still has no idea what has transpired. It isn’t until a reunion of the band, the revelation of unrequited love and the second disappearance of Sarah that all is revealed!

I really enjoyed this novel. It was full of quirkly characters and details that appeared, at first, to be irrelevant but actually connected solidly into the novel’s conclusion. To enjoy Friend is Not a Verb by Daniel Ehrenhaft you have to suspend your disbelief and simply follow the winding road of the story. It is well worth it! I would recommend this novel to teens and adults alike!