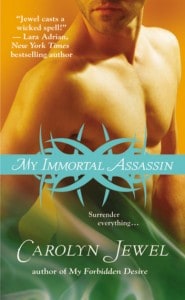 Grayson Spencer is hellbent on killing the dark mage who destroyed her life. But when her attempt fails, she is forced to turn to Durian, a feared demon and expert assassin. Newly armed with powerful magic she’s barely able to control, she’ll do whatever it takes to complete her mission–even surrender to a dangerous fiend whose eyes promise unimaginable pleasure.

Sworn to protect all mages, Durian can’t let Gray threaten the uneasy peace among demons, humans, and mages. So he proposes a deal: He’ll train Gray to master her gift if she’ll bind herself magically to him, submitting to his control. As Gray’s powers intensify, so too does Durian’s hunger for this fierce, irresistible woman. When the dark mage makes a final play for Gray, will the passion she and Durian share be the key to their survival or the seed of their destruction?