Living with Vulvodynia: Part One

I have already shared what vulvodynia is, how its diagnosed, causes, treatments and links of interest. Today I will share with you more on my story and how my life has been the last 5 years. I have been dreading this day for months because I knew it would be emotional for me to remember and tell the world what has been going on in my little world. I figured that it was time for the world to know that this is a real condition that affects women and makes life on some days unbearable. 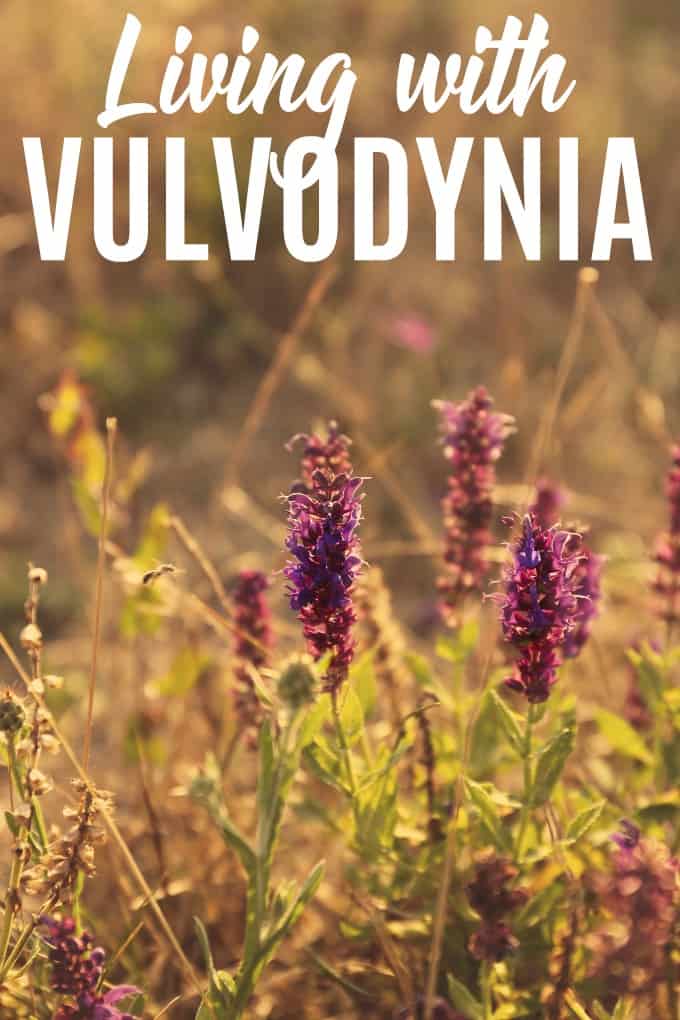 It all started December 11, 2005 after what I thought was a yeast infection. I was treated with Terazol cream and developed an allergic reaction to either the cream or the latex applicator. I was on fire and have never burned so fiercely in my life. I literally felt like I was sitting on a blowtorch and that someone was dousing my private parts in battery acid. It brought me to tears. I couldn’t sit, walk, lie down or get comfortable in any kind of position. I went to the doctor and was given steroids to calm the reaction. Unfortunately, they did nothing. I had a gut feeling that it was more serious than just an allergic reaction. I hate to say it, but I was right.

This was around Christmas time in 2005 and Olivia was 7 years old and Bridget just a 14 month old baby. I was also working full-time at a public practice accounting firm in Edmonton, AB. I struggled to make it through the work day and went to the bathroom throughout the day to just cry. I was miserable. I brought an ice pack to work and would sit on it all day to try and calm the burning. I wanted to die.

The worst thing was the doctors weren’t any help and would not take me seriously. They kept telling me that I looked normal and my tests were normal and they couldn’t find anything wrong with me. They tried to tell me it was in my head. I wanted to scream. I was so ANGRY! I felt betrayed by the medical community who I always expected to help me. With the amount of pain I was, I would have thought I would have been hospitalized. THE DOCTORS DID NOTHING FOR ME. Nothing.

I remember calling my mom at the end of December and telling her that I wanted to kill myself and that I couldn’t take living in pain. At that point it had been 3 weeks of constant, intense pain and no help from anyone. I just wanted to escape the pain and be normal again. I couldn’t stand being in my body. My mom realized how serious it was and flew to Edmonton from Ontario the next day. I felt better knowing that she loved me enough to drop everything and come to help me when I needed support.

When she arrived though it was a different story. I really needed to talk about what I was feeling and how scared I was that I didn’t understand what was going on with my body. Remember I was normal one day and then completely debilitated the next. I tried to express what I was feeling and voice my concerns, but she didn’t want to hear any of it. She said “Be positive”, “Think Positive”. That didn’t help at all and just made me feel worse. So I closed it all up inside myself and didn’t talk to anyone about it. I suffered in silence. Maybe she just couldn’t handle that her daughter was in pain- I really don’t know.

It was at that point that I decided that I was going to find a way out. I even picked the date to end it all. Funny thing was that I felt better after I picked the date because I knew the pain would soon end. I figured I can’t stand another month like this! Wow, if I had only known back then just how strong I was. I made it 5 years. I am no longer suicidal, but I can say with conviction that it was the lowest, darkest point of my life. I never want to experience those dark feelings again.

One thing that I remember clearly is the day I bought The V Book by Elizabeth Gunther Stewart from Chapters. It had a whole chapter on Vulvodynia and I knew after reading it, that’s precisely what I had. It was so nice just to be able to understand the “why”. Why my body was feeling pain and treatment options were out there. I went to my family doctor the next day and asked for a prescription of the tricyclic antidpressent, Nortriptyline. It’s prescribed for nerve pain.

The side effects were over the top! I felt like a zombie and like I was perma-stoned the first week. I was to slowly up my dosage to 150 mg by increasing 10 mg per week. The first day I had breaks in the constant burning so I knew it was helping a little bit. I was able to finally sleep through the night. The pills made me really tired and go into a very deep sleep. I had previously been waking up in the middle of the night worrying about everything.

I continued my job at the accounting firm but hated it there. It was a very toxic work environment and there were two bullies who worked there who liked to pick on everyone. I was so happy when we were posted to Ontario in June. I would finally be able to be close to my family again and get some help with taking care of the kids. I had zero luck with doctors in Alberta. I saw two gynecologists there and neither one had a clue about vulvodynia or how to treat it. One of them actually thought it was an “ear infection” when I told her about the condition….ummmm aren’t you supposed to know the female anatomy??? It was not comforting at all.

In Ontario, I got a job at a car dealership answering phones. I am in no way shape or form a secretary. I was used to dealing with the books, numbers, etc and NOT the front desk. So picture me on the loud speaker paging people all around the dealership to pick up line 1, 2 or whatever. I had also just started another medication for the pain called Gabapentin (Neurontin). One of the side effects was short-term memory loss. It got so bad that I couldn’t remember what I ate for breakfast by lunch. I had to try and learn a new job that was completely foreign to me while on this med. Not a pretty sight.

Let’s just say it didn’t work out. I worked with a very mean woman who was training me and would not let me take notes when she was teaching me something. It was hell. I’d like to see her concentrate with her v on fire and her brain like mush. I was there 4 weeks and I was done. Thankfully another opportunity at an accounting firm in town popped up and I started working there.

I remember saying screw it and bring my donut cushion to my new job. You can buy them at the pharmacy and they are usually for hemorroids. It did the trick because it kept pressure off my sore area. I did my best to keep busy and try to block the pain, but it was tough. I still went to the bathroom to cry. I also started smoking just so I could get outside away from everyone to take breaks. I counted the hours till the work day ended and would often leave early.

A few months after starting my new job, I got in with a pelvic floor physiotherapist in Ottawa named Caroline Allen. I had heard on the online support groups that PT had cured some people with vulvodynia so I was hopeful. My first visit with Caroline Allen really lifted my spirits. She did her exam and told me that she could help me! My muscles were really bad and that was her specialty!

I began seeing her once a week. Bear in mind it was a 3 hour drive for me round trip once a week. I would flare afterwards though because she was working my poor sore muscles. It felt like I was beat up. She did my legs, butt, stomach and vagina. Yes, it’s physiotherapy for your vagina. It’s a muscle too.

After about 4 or 5 months, the burning subsided altogether. I would still experience other pain sensations like stinging and stabbing, but the horrific vaginal burning was gone. Caroline Allen saved my life. I was improving and I was so happy about it.

(To Be Continued tomorrow….)