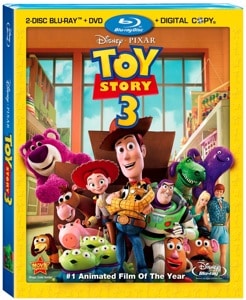 Toy Story 3 welcomes Woody (voice of Tom Hanks), Buzz (voice of Tim Allen) and the whole gang back as Andy prepares to depart for college and his loyal toys find themselves in… day care!  These untamed tots with their sticky little fingers do not play nice, so it’s all for one and one for all as plans for the great escape get underway. More than a few new faces—some plastic, some plush—join the adventure, including iconic swinging bachelor and Barbie’s counterpart Ken (voice of Michael Keaton), a thespian hedgehog named Mr. Pricklepants (voice of Timothy Dalton) and a pink, strawberry-scented teddy bear called Lots-o’-Huggin’ Bear (voice of Ned Beatty).  Directed by Lee Unkrich (co-director of Toy Story 2 and Finding Nemo), produced by Pixar veteran Darla K. Anderson (Cars, Monsters, Inc.) and written by Academy Award®-winning screenwriter Michael Arndt (Little Miss Sunshine), Toy Story 3 is a comical new adventure! 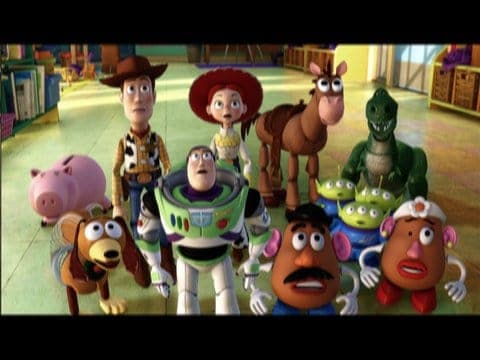 I am ashamed to admit it but I never did see Toy Story and Toy Story 2. After watching Toy Story 3, I can now say with confidence, what the heck was I thinking?!? This movie is fantastic! It made me howl with laughter and shed tears and kept me captivated from start to finish. This is the perfect movie for the entire family- from little kids to teens to adults!

Even though I missed the first two movies, I was up to speed right away on who all the characters were. I figured out that Andy, the character now heading to college, was a youngster in the previous two films and these were his beloved toys. Woody played by Tom Hanks was his very special toy and Andy was planning on bringing him to college. The other toys like Buzz Lightyear, Jessie and Rex were headed for the attic for safe storage. However, that’s not what ended up happening! The toys all ended up being donated to Sunnyside Daycare and you would think that would be a good thing right? However, this daycare was ruled by an evil teddy bear that smelled of strawberries.  The movie follows the toys at the daycare as they try to escape their captors and get back home to Andy before he heads off to college.

I LOVED the Potato Head couple! They were so cute! I giggled at the end when Mr. Potato Head said “Get out of my butt!” to the peas in a pod. Also, Mrs. Potato Head left her eye back in Andy’s room so she could always see what was going on at the homefront. It was silly, but made me laugh all the same. The FUNNIEST part of the movie were the scenes between Barbie and Ken! Ken was hilarious!

With all the laughing going on in our house, we also had some tears. There’s a scene towards the end that was a real tearjerker. I won’t ruin it for you, but it did touch my heart.

I highly recommend Toy Story 3! Pick it up to watch with your family or buy as a Christmas gift. It’s in stores now!

Download Toy Story 3 Activity and Colouring Pages for your kids!