I just found the perfect Christmas present for my teenage niece….the Sandisk Sansa Fuze+ MP3 Player which gives you “more player for less money.” I was really impressed with how far the Sandisk Sansa Fuze+ MP3 capability has come from my old MP3 player. The Sandisk Sansa Fuze+ MP3 player even has invisible touch control technology which took me a few minutes to figure out but once I did I loved it. I am far from technologically advanced when it comes to electronics but this was something even I could appreciate with its sleek design, large and bright 2.4” color LCD screen and crisp, clear sound. The Sandisk Sansa Fuze+ MP3 Player that I tested for the review has 4GB and plays videos, music, photos, audiobooks and podcasts. I was most excited to try out the audiobooks feature because I would love to listen to audiobooks on long drives while my husband plays his favorite tunes over and over on the radio. I also thought the “play, pause and record” FM radio feature was fantastic. You can even expand the storage space for your library if you have a large collection by adding in a microSD/microSDHC card. 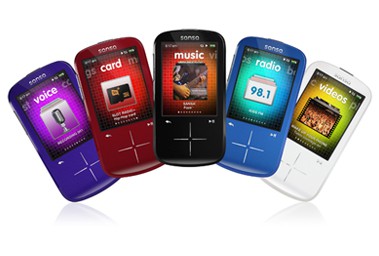 One of the reasons that I rarely used an MP3 player in the past is that I was too lazy to download lots of songs but the VH1 SlotRadio card takes the effort out of downloading and gives you up to 1,000 songs that you just easily slide into the Sandisk Sansa Fuze+ MP3 player slot and you are ready to go. There is a great selection of VH1 SlotRadio cards to suite your taste or mood. I tried the VH1 Classic songs collection and thought it was great. This is perfect for me because now when I want to listen to music on the go but don’t have the time to download songs, I can just pop in my VH1 SlotRadio card. It includes a great mix of songs from Bon Jovi, Janet Jackson, No Doubt, U2, David Bowie and many more artists.

You can learn more about VH1 SlotRadio and also check out the entire collection of cards here. Prices range from $29.99-$39.99.

The Sandisk Sansa Fuze+ MP3 Player far exceeded my expectations and is an excellent value at only $79.99. The ability to add VH1 SlotRadio cards really makes this top of the line of MP3 players in my opinion.

I wrote this review while participating in a blog tour campaign by Mom Central Consulting on behalf of SanDisk and received the SanDisk Sansa Fuze+ and VH1 slotRadio Card to facilitate my review.