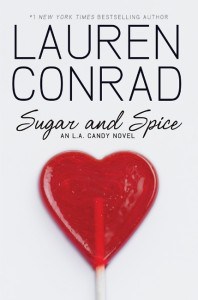 Fresh from being betrayed by one of her closest friends, new reality-television celebrity Jane Roberts has learned a few lessons. Most important: know who to trust. And in Hollywood, that list is short.

Although the press is intent on creating a tabloid war between her and ex-friend/current-costar Madison Parker, Jane just wants to take control of her life. She’s started by swearing off guys and the drama that comes with them. But when her high school sweetheart Caleb and her unrequited L.A. crush Braden show up, both acting sweeter than ever, Jane has a hard time remembering her no-boys rule. . . .

Her best friend, Scarlett, has only one guy on her mind: her new boyfriend, Liam. The girl who once thought love was a four-letter word is now head over heels. The problem is, being on a hit reality show means hanging out with other guys on-camera, and Liam isn’t too happy with pretending to play a bit part in her love life.

Just when everything feels out of control, Jane makes a shocking discovery—one that changes everyone’s definition of “reality” forever.

In her deliciously entertaining novel, television star Lauren Conrad pulls back the curtain on young Hollywood and shows that sometimes the real drama is behind the scenes.

This is the third and final book in the LA Candy series by Lauren Conrad, star of the reality show, The Hills. I reviewed the first two books, LA Candy and Sweet Little Lies. They were both fast and fun reads and Sugar and Spice was no different. It was great! In fact, I was sad to see it end and know that it was the last time I would be hearing about Jane and her crew.

The book continues on where Sweet Little Lies left off and I do recommend you read the first two books before taking on this one. I think you might be confused because there is lots of history that carries on into this novel. For instance, we find out who Madison’s stalker is! I was really wanting to know this info as I was reading Sweet Little Lies and it was interesting to see finally who it was. I love the Madison storyline. She is the bad girl as opposed to the good girl, Jane. Madison’s whole life is one big lie and I guess that made her more of an interesting character. I never ended up disliking her character and felt sorry for her by the end of the book. I wish Lauren Conrad had gone more in depth with her storyline with her “stalker” and the aftermath.

I enjoyed reading about Jane and her relationship drama. It was funny to see how her new boyfriend, Caleb (who is actually her old high school boyfriend) actually likes the paparazzi and being photographed. I was cheering for Jane at the end when she made up her mind about men. I won’t ruin it for you, but as I was reading it, I was thinking- you go girl! Very empowering and strong and I have lots of respect for her character now.

I am sad to see this series end. I hope Lauren Conrad writes more YA because she is so good at it!

Want a sneak peek? Browse inside.