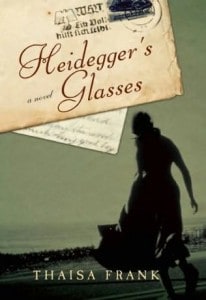 Heidegger’s Glasses by Thaisa Frank was nothing at all like what I had imagined. I thought it would be an engrossing read, but I kept putting it aside in favor of other books until I finally had to force myself to finish it in two sittings. I am not extremely knowledgeable about the events that took place during World War II, nor about the historical figures that were fictionalized to some extent in Frank’s ambitious debut. From what I understand, Heidegger’s Glasses is a blend of fact and fiction, but there is no sort of Author’s Note to differentiate between the two. Now that I’ve finished the book and I’ve sat around contemplating all the words I’ve just read, I’m still really confused.

Heidegger’s Glasses focuses very little on Hitler and his interest in the occult and using it to strategize; this is actually what caught my interest and made me want to read the book. Then I discovered it really wasn’t what this was all about. It focuses on a small group of people who are isolated in an abandoned mine that has been engineered to look like an actual street, complete with a sky that changes colors to match the time of day. The group of people in this compound have an important task: they write replies to the dead who were massacred during the Holocaust and encourage their friends and loved ones to join them at their camps. Those who wrote the replies were given this job and sometimes rescued from the gas chambers and other forms of execution because of the languages they could read and write.

One of the members of this group, Elie Schacten, risks her life to help smuggle people out of the country and save them from death. The SS officer in charge, Gerhardt Lodenstein, is her lover and helps her in her ventures.

Then the compound receives a letter from the German philosopher and Nazi supporter Martin Heidegger, addressed to his optometrist, a man who is Jewish. The Scribes must pen a reply to Heidegger, but Elie makes it her mission to find the optometrist and save his life.

I had never heard of Martin Heidegger before reading this novel, and if you haven’t either and are planning on reading this, it might help you to read a quick summary about him. If I had done that before reading this, I might have liked this better. Or it’s possible that I just entirely missed the point of this novel. I wish I had enjoyed it more because I do enjoy historical fiction, but this isn’t at the top of my Recommends list for those who ask.