Disneynature: The Crimson Wing- Mystery of the Flamingos DVD Review 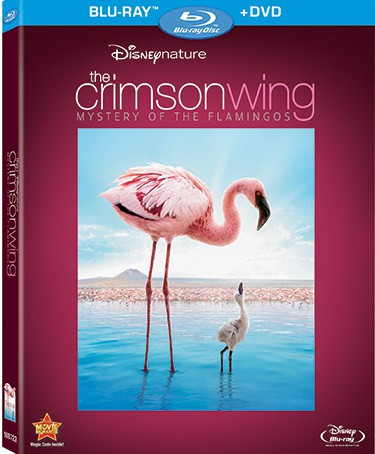 Discover one of nature’s last great mysteries in The Crimson Wing, a miraculous story of love, courage and survival from Disneynature- the stuido that brought you earth. In a place like no other on the planet, the dramatic and desolate Lake Natron in northern Tanzania, you’ll witness a spectacle unlike anything you’ve seen before- a million crimson-winged flamingos arrive to continue the circle of life. Focusing on the adventures of a single chick, and set against a backdrop of never-before-filmed landscapes, The Crimson Wing is a visually stunning journey into life and struggles of the mysterious and inspiring flamingo.

•Living Planet – Fully interactive through BD‐Live, explore the Earth with up‐to‐date facts, migration information and videos by the filmmakers and leading wildlife experts

I really had no clue about flamingos prior to watching this film. Sure, I knew that you put plastic flamingos on a person’s lawn when they turn 40 and I had seen them briefly on visits to the zoo. After seeing this movie though, I have a newfound respect and sense of wonder about this amazing creature. If you have never watched a documentary, then it’s time you start. Disneynature blows this one out of the water. It’s absolutely incredible. I watched it a few days ago and am still thinking about it!

For starters, the scenery was breathtaking. I was introduced to Lake Natron, a salt water lake in Tanzania. This is a lake that holds no life forms yet all the flamingos in Africa are born here each year. I was fascinated seeing the formation of the salt water island in the centre of the lake and how desolate and barren it was. The flamingos congregate each year and we are talking HUGE numbers. I can’t remember how many they said, but it was staggering! I learned that flamingos live in the collective and are a social bird so they love being all together. It was like some big flamingo reunion!

I watched the mothers lay their eggs and was there when the chicks began to hatch. Amazing! They were so cute and it was heartwarming to watch the parents take care of their young.  It was sad seeing the “salt shackles” that formed around some of the chicks legs. The narrator indicated this was caused from the high concentration of salt in the water and it was “luck of the draw” if a chick was plagued with them. The poor things had such trouble walking with these huge salt deposits on their little legs.

When it was time to leave Lake Natron for the year, the parent flamingos went on their own. The chicks still couldn’t fly so they were lead by Guardian Birds- older flamingos whose job was to escort them to their next destination. They all walked in a line following these birds and it was neat watching them all make their way across the salt island.

One of my favourite parts was when the chicks were taking their first flight. They had tried for awhile but couldn’t until they developed all their feathers. When they took off for the first time, I sat in wonder thinking how free and exciting it must be to be able to fly! On a side note, I thought it was interesting to see how flamingos actually take off to fly. They run (reminded of me an airplane taxing before takeoff) and then lift off!

I am DEFINITELY starting a Disneynature collection! If they are all like this movie, then I cannot wait to see them! Buy this one when it comes out in stores on October 19th. It’s a film that the whole family can enjoy and learn something in the process!