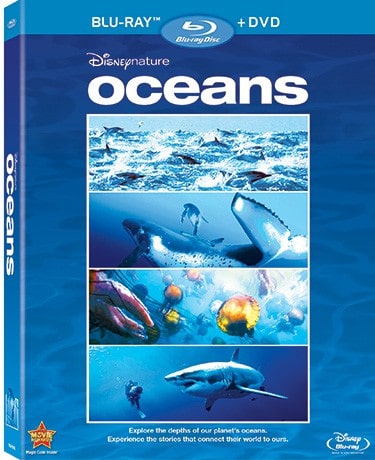 Dive into Oceans from Disneynature- the studio that brought you earth- for a spectacular story about remarkable creatures under the sea.  Stunning images await you as you journey into the depths of a wonderland filled with mystery, beauty and power. It’s an unprecedented look at the lives of these elusive deepwater creatures through their own eyes. Incredible state-of-the-art underwater filmmaking will take your breath away as you migrate with whales, swim alongside a great white shark and race with dolphins at play. Filled with adventure, comedy and drama, Oceans is a fascinating and thought-provoking experience you’ll never forget.

Amazing! The ocean has always been a fascination of mine. We often visit the Atlantic ocean near our home and admire its power and beauty. After seeing Oceans, I have a new appreciation for the ocean and its creatures.

This film touches on a large variety of creatures in the oceans worldwide. There were many that I had no clue existed and were very different looking. Take the Ribbon Eel and its long colourful tail and an octopus that looks like a bright blanket! My favourite ones were the whales, dolphins, seals, penguins and the adorable sea lions. John and I had a chuckle at the scene with the sea lions lazing in the sun on the shore. Watch the movie and you will know the part I mean!!

I loved watching the dolphins swim and play and jump high out of the water doing tricks. I have always longed to swim with the dolphins and they are my daughter’s favourite animal. I could watch an entire movie just on the dolphins!

It was neat to see a battle between two very large groups of crabs on the ocean floor. Hundreds (or  maybe thousands) of crabs on opposite sides began advancing towards each other like they were ready to go to war. Then when they came together it was chaos! Crabs climbing on crabs- I couldn’t get over how many there were. You couldn’t even see the ocean floor! It was pretty incredible to watch and I loved the music playing in the background- very fitting.

I also enjoyed visiting the Penguins in Antarctica. They are so cute! Watching the penguins slip and slide on the ice was also quite comical. The ocean water in Antarctica is such a deep blue colour. It was such a stark, frozen and hauntingly beautiful landscape.

I would love to watch a Disneynature movie where they focus on just one of these ocean creatures so I could get to know them really good. This film was an excellent overview on the ocean and as whole and the creatures were touched on briefly. I can’t remember all the names though because there was just so many.

If you love the ocean like me and want to see a movie that is both interesting and beautiful, pick up Oceans today!

For every purchase of Oceans between October 19 through 25th, Disneynature will make a contribution to help protect coral reefs. So this gives you even more reason to pick it up for your family or perhaps a Christmas gift!