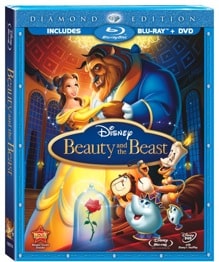 Set in and around a quaint French village during the late 18th century, Beauty and the Beast follows the fantastic adventures of Belle, a bright and beautiful young woman who finds escape from her ordinary life, and the advances of a boorish suitor, Gaston, by reading books. Meanwhile, off in a castle in the distance, a cruel young prince is cast under the spell of an enchantress who turns him into a tormented beast, while transforming his servants into animated household objects. In order to remove the curse, the Beast must discover a true love who will return his affection before the last petal falls from an enchanted rose. When Belle’s inventor father stumbles upon the Beast’s castle and is taken prisoner, Belle comes to the rescue and agrees to take her father’s place. With the help of the castle’s enchanted staff, she sees beneath the Beast’s exterior and discovers the heart and soul of a human prince. 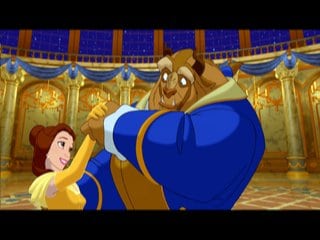 I remember watching Beauty and the Beast on VHS when it first came out in 1992. I was 14 years old and loved it back then. Now that I am older, nothing has changed. I am still enchanted by this Disney classic!  The story remains the same, but the picture is MUCH sharper and the sound is crisper. It was a whole new experience to watch it on our big screen TV…like being in a movie theatre! Technology has come a long way since 1992! 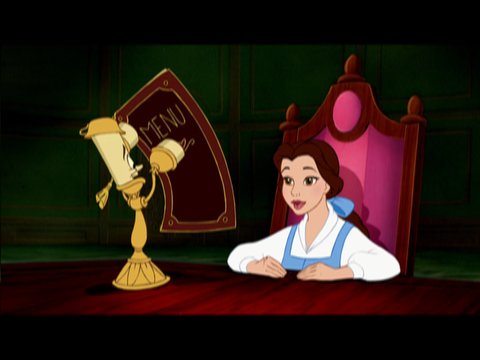 I was singing along to all the songs in the movie and annoying John because I don’t sing that well! Can you believe he has NEVER seen Beauty in the Beast before? This was his first time seeing it! I was in shock since I thought everyone had seen this wonderful movie, but I guess I was wrong. He also enjoyed it and said he can see why it is a classic. He got a kick out of the music and talking household objects. He recognized the voice of Jerry Orbach who used to star on Law & Order and has since passed away. He played the voice of Lumiere.

I am a sucker for a love story so I enjoyed the scenes with the Beast and Belle.  I knew what lay under that tough exterior of the Beast. Even though I knew how it ended, I was still on the edge of my seat worried they wouldn’t break the curse in time! Of course, its a fairy tale with a happy ending, but there were some scary parts in the movie. It is a kid’s movie, but the younger kids may find it scary. My girls both enjoyed it though, but they are a little older.

If you haven’t seen it, then you are missing out. I recommend picking it up and watching it. If you have seen it, buy the new Diamond Edition DVD + Blu-Ray and enjoy the film and all the extras!

Get a coupon for $10 off the Blu-ray + DVD Combo Pack for this release from Disney Movie Rewards. 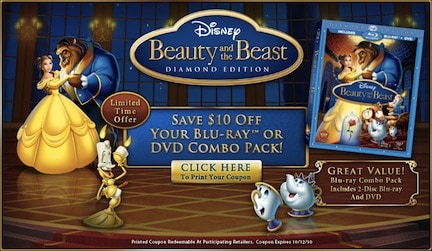