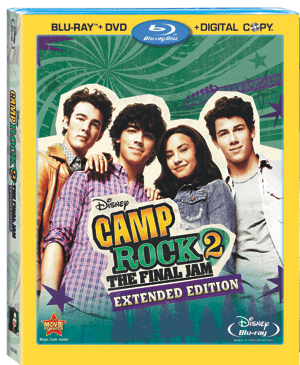 Get ready to ROCK with the biggest musical event of the year- now in an Extended Edition with never-before-seen scenes and songs! Join Mitchie (Demi Lovato), Shane, Nate and Jason (Jonas Brothers), and some brand-new campers across the lake for 2 times the music, 2 times the dance moves and 2 times the fun in Camp Rock 2: The Final Jam! Plus only this Extended Edition Combo Pack includes a behind-the-scenes introduction to the newest stars, music videos by Camp Rockers from around the world, and “Rock Along”, where you take center stage!

Mitchie can’t wait to go back to Camp Rock and spend the summer making new music with her friends and superstar Shane Gray. But the slick new camp across the lake, Camp Star, has drummed up some serious competition- featuring newcomers Luke (Matthew “Mdot” Finley) and Dana (Chloe Bridges). In a sensational battle of the bands, with Camp Rock’s future at stake, will Camp Rock prove that music, teamwork, and spirit are what truly matter?

Blu-ray Exclusive Bonus Features:
Everything on the DVD, Plus…

I haven’t seen the original Camp Rock movie, but it wasn’t hard to pick up where the story left off. In fact, I was able to figure out right away who all the main characters were and get a good sense of their individual personalities.

As I watching the movie, I felt a longing to return to my childhood summer camp. The scenery in this movie is breathtaking. I would have loved to have been a camper at Camp Rock! Let’s just say it brought back fond memories for me.

This movie is a musical so be prepared for lots and lots of singing and dancing. The cast is phenomenal. I couldn’t get over how talented these kids are. Mitchie who is played by Demi Lovato was my favourite character. She is a beautiful girl with the voice of an angel. I loved the numbers where she was the lead singer (which was pretty much all of them except for a few). Her character is a staunch Camp Rocker and she will do just about anything to make sure that Camp Rock keeps it doors open this summer and in the future.

Mitchie and the other Camp Rockers feel threatened by the new fancy music camp for kids across the lake called Camp Star. After touring the camp when they were invited over for a “bonfire”, they were blown away by how elaborate it was. I was thinking it looked more like a luxury resort than a kid’s camp and the first thing that came into my mind when I saw it was about how much it would cost to send your kid there?? I bet quite a big chunk of change! The Camp Star campers are very competitive and want to show off their extensive routines and special effects in their performances. Camp Rock does not have the resources that Camp Star does, but they do have something much better- they have heart.

As the movie goes on, it shows the Camp Rockers desperately preparing for “Camp Wars”- a live TV face off with Camp Star where the public votes the winner. Mitchie is very stressed out and running like a chicken with her head off as she tries to coordinate everyone on her own. She is losing sight of the main reason she came to Camp Rock- to cherish the music and to connect with others and of course have FUN! There is nothing fun about constantly working and stressing!

The scene at the end where the camps are facing off at The Final Jam is amazing. Both performances were wonderful. I love the choreography of Camp Star and the music talent of the Camp Rock duet. I won’t say how it ended and liked the little twist they threw in at the end. It was very touching.

Overall, this is an excellent film for the whole family to enjoy and one where you will want to get up and dance yourself!