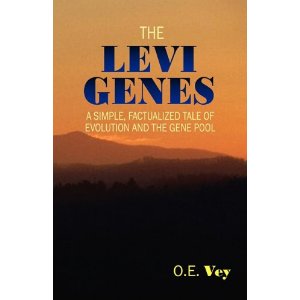 Title: THE LEVI GENES: A Simple, Factualized Tale of Evolution and the Gene Pool

Sorry, can’t do it. I got about three-quarters of the way through this book and realized that I wasn’t ever finishing it… It’s no wonder that O.E. Vey wrote this book under a pseudonym. The premise behind the book is simple and lures you in. God (short for Giuseppe O’Neill Djiboutti) is a student at Universe University and Earth is his thesis project in Creation 101. His corner of the lab is section E, also called E-Den.

At first this book seemed pretty harmless, talking about the Gene Pool and the desirable and undesirable aspects of humanity. He explains several catastrophic events in Earth’s history as temper tantrums (or drunken experiments) of God. It was when he started taking Bible stories and putting his own interpretations on them that I began to get truly offended… I consider myself a Christian but I’m willing to allow that someone else’s beliefs shouldn’t be squashed for the sake of mine. I don’t think he does.

It was when he started ticking off the “genetic qualities” that should be allowed to die off that I realized this man’s opinions are atrocious. He went so far to suggest that the weak or sickly (ie. premature babies) should be allowed to die and not try to save them… I quote “Stop all NICU operations. If preemies or newborns can’t make it on the own, take a damn hint.” And that goes for the unlucky too – drivers shouldn’t have to wear seatbelts, if they have an accident and die, then that cleans up the gene pool a little more. And he included children in this as well and suggested that we discard seatbelts and car seats – “Consider the floor space behind the seat or in the trunk”. as safe places for the little ones. He includes people who are stupid and ugly as unnecessary to the gene pool as well.

Classified as Fiction/Humorous/General, I would add one more category. OFFENSIVE.

I received a copy of this book to review but I was not financially compensated in any way. The opinions expressed are my own and are based on my observations while reading this novel.*