Book Review | Out of the Shadows 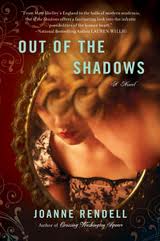 Title: Out of the Shadows

After her mother’s death, Clara Fitzgerald withdrew into herself and coped with her loss by obsessing over the truths hidden within the bedtime stories her mother told her during her childhood. Her fiance, Professor Anthony Greene, has taken a personal interest in Clara’s possible blood relation to author Mary Shelley as he works to develop a drug that will prevent the formation of cancerous tumors and increase the user’s longevity. As Anthony pursues his dreams of notoriety, Clara is left wondering if his future will include her or if she will remain in his past.

Putting her own Darwinian research on hold, Clara becomes obsessed with Mary Shelley. An introduction to an elderly and sickly Shelley biographer will set Clara on the path to discover the long-lost journals and paper of Mary Shelley, and redefine the future she anticipated for herself.

I’m not exactly sure what I was expecting when I read Out of the Shadows by Joanne Rendell, but it definitely surprised me. Overall, I liked Rendell’s writing style and the connection between Shelley’s past and Clara’s present and future. The book goes back and forth between historical fiction involving Mary Shelley’s romance with Percy Shelley and the friction between Mary and her father and stepmother, and then brings the reader to Clara Fitzgerald’s present. Like her ancestor, Clara also suffers from losing her mother. But beyond their deep relationships with their mothers, I am not sure why Mary Shelley was such a huge part of this novel.

Throughout Clara’s story, Rendell includes a few pages featuring Mary Shelley as a young girl before she sits down to write her famous novel Frankenstein. This is just my take on it, but I felt it was intrusive and that I might have liked reading those chapters more if they were in a book that was solely dedicated to Mary Shelley. If they were meant to be Clara’s own writings on Shelley, it should have been more apparent to the reader. Even now I’m still questioning whether that was the case, or whether I am supposed to believe that those chapters were truth for this fictional story.

Rendell penned a likable cast of characters, but one of my biggest complaints is that she didn’t spend enough time allowing the reader to become acquainted with the best of the lot. In addition to Anthony, there is another character named Daniel that Clara becomes attracted to. I would have liked to read more scenes involving Clara and Daniel, and maybe even a scene featuring Clara, Daniel, and Anthony. I was pleased with the romantic resolution, though it was a bit implausible and somewhat silly in how it was resolved.

It might sound like I didn’t like this book at all, but I did like it; I can see myself recommending it to certain friends and acquaintances. I just anticipated the flow of the book would go one way, and instead it went in another direction. Because the book is depicted to be about the relationship between mothers and daughters, I also thought we would see more of a bond between Shelley biographer Kay and Clara. There was definitely a bond, but I don’t feel it was formed as well as it could have been. I think if you start reading this book without too many expectations, you will enjoy it; definitely do not do what I did and try to figure everything out beforehand. If you do, you will end up disappointed.