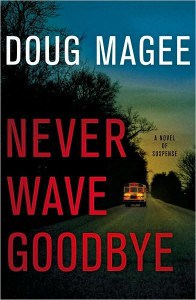 Trying to read a novel by a new writer, in my mind, is always a bit of a crap shoot. I have found some new authors whose first books are truly amazing and those, sadly, whose are not. So, when I had the chance to read Never Wave Goodbye, which is the first novel by Doug Magee, I was a bit leery because I wasn’t sure on which side of the fence this novel was going to fall.

Never Wave Goodbye has a really interesting premise. Lena is a woman with a shaky marriage and a nine-year-old daughter named Sarah. When Sarah is picked up by the driver from the summer camp she will be attending for two weeks. Lena hopes that this time on her own with her husband David will give them a chance to reconcile their differences and fix their marriage. The whole picture shifts, however, when another van arrives 30 minutes later and Lena discovers that her daughter has been kidnapped, along with three other children who are to be attending the same camp.

This novel is really interesting because it shifts back and forth between the parents of the children to the experience being had by the children themselves. There are so many questions coming out throughout the novel as it is discovered that the kidnapping is part of a very complex plan and there are many potential suspects among the parents. The novel also looks, indirectly, at the impact that the media can have on these events as a lot of dirt comes to the surface about all of the parents and the reader continually finds new suspects in the novel. Who is behind this kidnapping plot? Will the children be saved?

I enjoyed this novel overall. Magee’s writing style is engaging and the story is interesting. Though there are a few unanswered questions in the book (like how the kidnappers knew who the 4 children were that were to be in the van that morning), overall I thought that the book was quite well-written. I also appreciated the epilogue at the end of the novel because it gave another perspective on Sarah’s experience during the kidnapping.

I’d recommend this novel. I think anyone who enjoys an easy to read suspense novel would really like Never Wave Goodbye by Doug Magee.