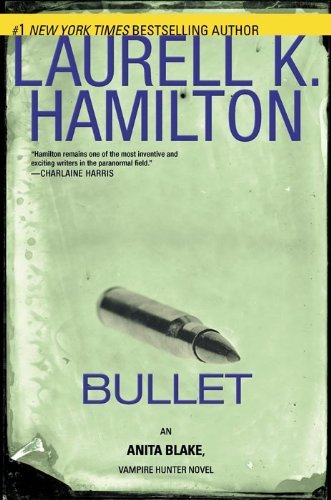 I mentioned to a colleague at work that I was going to be reading and reviewing Bullet by Laurel K. Hamilton and I was a bit leery from the start because her response was, “Is THIS the first book in the series you’ve read?” (which it was). I knew it was the 19th book in the series when I decided to read it, but I hoped that it would be the type of book that I could read as a free-standing novel and not become completely lost without the back-history of the previous 18 books.

The main character in the novel is Anita Blake and she is one busy woman. She is a US Marshall but she is also a vampire executioner. Anita is also surrounded by a number of members of the vampire community as well as an extraordinary number of men that she is attached to in various ways.

The plot of the story surrounds the return of a vampire that was previously believed to be dead. She wants to take over the entire vampire culture and reign supreme with all of the power. What will Anita do?

I think to appreciate this book, I should have read some of the books in the series that preceded it. I understand the basic plot of the novel but I felt a bit lost among the relationships between characters and the obviously intricate history that had been established in previous books. I also wasn’t a huge fan of the all sex in this novel – I’m not a prude but I think it was too much for me (it bored me to be honest).

I think Anita Blake is an interesting character and that Bullet has some entertaining elements but I’d recommend readers try out some earlier books in this series before jumping into reading Bullet.