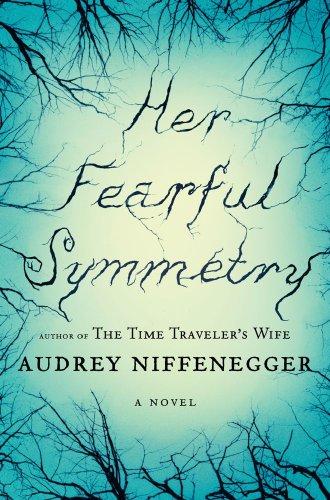 Title: Her Fearful Symmetry: A Novel

20 years ago, Edie and her twin sister Elspeth became estranged from one another after Elspeth’s fiance Jack left her for Edie. Elspeth regretted not getting to know her sister’s twin daughters, and left them everything after the cancer took her life. However, Elspeth has not quietly crossed over into the afterlife; her spirit is alive and aware in the flat, ready to make contact with her long-lost nieces.

21-year-old identical mirror twins Julia and Valentina Poole are surprised when a letter arrives in the mail to inform them they have just come into a large sum of money and are now the owners of an expensive London flat. But in order to claim their inheritance there is a catch: the twins must relocate from their parents’ home in Lake Forest and live in the flat together for one year. Additionally, their parents Edie and Jack must not ever set foot in the flat. As Julia and  or be given any of Elspeth’s possessions or money. As Julia and Valentina make a life for themselves in London, they meet Elspeth’s lover Robert, and the upstairs neighbor Martin, who suffers from OCD and cannot leave his own flat. The twins’ relationship becomes strained after Elspeth’s spirit makes contact with them and Valentina, the weaker-willed of the twins, wants a life separate from Julia.

After falling in love with The Time Traveler’s Wife by Audrey Niffenegger, I knew anything she would write after it would be just as wonderful and beautifully written. LikeÂ The Time Traveler’s Wife, Niffenegger’s newest offering deals with the supernatural and makes it utterly real and believable. Some of my favorite parts of this novel were the scenes from Elspeth’s point of view as she comes into awareness as a ghost, growing stronger and more aware as the days pass. I truly felt her sadness at never having met her nieces while she was alive, and was glad that she got the chance to connect with them in her death.

Julia and Valentina at first were very hard for me to tell apart from one another. As the story progressed, they each began to stand out a little more. I didn’t really warm up to either of the twins because they just didn’t speak or act in ways I considered appropriate for women of their ages. They were extremely sheltered, inexperienced, and without emotion. The scenes where they argued with one another felt just a touch out of character as the emotion just exploded, but were relevant to the startling twists and turns the plot began to take.

Her Fearful Symmetry didn’t make as much of an impact on me as it probably should have because I started to figure out things about the characters and the overall story development long before they were revealed. I was still able to appreciate the setting and some of the characters, but the ending just upset me. I’m still pondering it, trying to understand what motivated a particular character to act in such a manner. Several of the various story lines in the book felt very open ended, but the novel’s curtain call didn’t leave me with the sense that there would be a sequel. I don’t feel there needs to be a sequel, but I wouldn’t be entirely against one if it came to fruition. This is definitely one that book clubs around the world will be talking about for years.