The Spy Next Door DVD Review 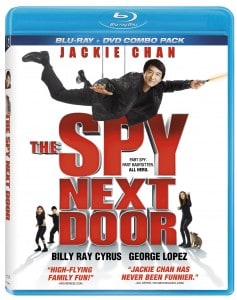 Acclaimed martial-arts superstar Jackie Chan (The Forbidden Kingdom) is back to kick up the action and bring in the laughs with his latest film, The Spy Next Door, making its way onto a 2-disc Blu-ray Combo Pack which includes both Blu-ray and DVD and is also available as a separate DVD and for digital download. From the director of Snow Dogs, the film features a star-studded cast including Amber Valletta (Hitch), Billy Ray Cyrus (Disney’s Hannah Montana) and George Lopez (Valentine’s Day), and grossed over $24 million at the box office.  This KIDS FIRST!-endorsed action-comedy which also received the Dove Foundation Seal of Approval, contains bonus features the whole family will enjoy including a blooper reel and two fun featurettes that bring audiences up-close and personal with the cast.

In true Jackie Chan fashion, The Spy Next Door delivers incredible stunts, fast action suspense and hearty family entertainment.  When Bob Ho is called to babysit his neighbor’s unruly children, they accidentally blow his cover as a spy by downloading secret codes on his computer.  Suddenly Bob has to kick into super agent mode and take the kids on an action-packed adventure that turns suburbia upside down.  Bob fights off assassins and arch villains, narrowly escapes traps and outsmarts double-agents while somehow managing to keep the kids out of harm’s way.  The film is a High-flying family fun (movieweb.com) and Zany action for the whole family (nycmovieguru.com).

The Spy Next Door will be available on Blu-ray Combo pack for the suggested retail price of $39.99 or on DVD for $29.95.

John, Olivia, Bridget and I sat down the other night to watch The Spy Next Door and I really wasn’t sure what to expect. I have never seen a Jackie Chan movie before (I know that’s nuts!), but I do know that he is an accomplished martial artist. I was expecting to see lots of stunts and I was not disappointed!

This movie is hilarious!! Jackie Chan is a great actor even though his first language isn’t English. We were all cracking up at different parts. Olivia liked the part when the little girl fed her pet pig some bacon and then her sister and brother told her what bacon actually is. The look on her face was priceless and so funny! I liked the scene where Bob (Jackie Chan) rigged the house with all his spy equipment so he could keep tabs on the kids. He was always a step ahead of them and knew anytime they were about to do something they wouldn’t supposed to do. He took the little girl shopping and as soon as she wandered away, he was able to quickly locate her with his tracking device. I was shopping with Bridget and thought I so need that!!

Billy Ray Cyrus had a small role in the film too. I was a big fan of his back in his younger years when he did “Achy Breaky Heart”. He still looks good, but I am not a fan of his new hair. I think the mullet actually looked better (I can’t believe I just said that!). I thought he did a good job as co-worker of Bob (Jackie Chan).

I would be remiss if I did not mention the stunts which apparently Jackie Chan does himself. I kept thinking to myself that he is great shape and moves so fast. He climbed onto a roof like it was nothing and brought down the family cat. I couldn’t even imagine trying that myself.  It was just really cool to watch him “in action”.

This is a great film the whole family can enjoy together. I definitely want to check out more of Jackie Chan’s movies now.

I also received a signed poster by Jackie Chan himself! John was in awe when that came in the mail.  Its an awesome addition to our movie memorabilia collection. Thanks Jackie!

*I was not financially compensated for this post. I received a sample of this product for review purposes. The opinions are my own, based on my experience with the product.*