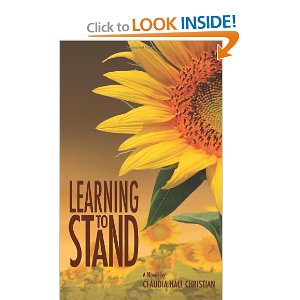 Learning to Stand, by Claudia Hall Christian, is the second book in a series of thrillers so, I must admit, I was a little leery when I started reading it. I’m always concerned that there will either be too much backstory (to catch me up as a reader) and not enough focus on the story at hand or there won’t be enough backstory, which will leave me trying to figure out the connections between characters that I didn’t see develop in previous books

Right away, I really liked the book’s main character – Alex. She has a strong personality and appears very confident. She makes mistakes throughout the novel but it doesn’t detract from her other traits – it simply makes her more human to me and also a more likable character. She’s the type of person I wish I was (at times) and reminds me of some of my friends.

I really liked Alex, and I found the novel interesting and engaging with many complex characters, but at the same time it was incredibly difficult to follow for the better part of the book. Learning to Stand is definitely a novel that needs to have the novel previous to it (The Fey) read first. It was obvious that Hall wrote the novel assuming readers would have read the first book in the series because there is very little backstory provided which makes it confusing and difficult to follow at times. It is like walking in halfway through a conversation where you are interested in what is going on but you are desperately trying to catch up put all the pieces together.

That being said, I did enjoy the novel. I plan to go and find a copy of the first novel (The Fey), read it, and then read Learning to Stand again. I like Alex’s character and Hall’s style of writing so much that I think doing so would be worthwhile!