Book Review | A Change in Altitude 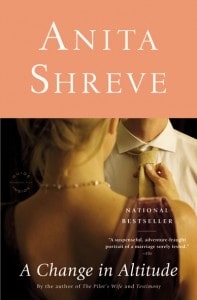 Title: A Change in Altitude: A Novel

I was interested in reading A Change in Altitude by Anita Shreve because I’d read one of her previous books (The Pilot’s Wife) and had really enjoyed it. I hoped I would enjoy this novel because it was promoted as a “National Bestseller” and had received some excellent reviews in the front of the novel.

From the beginning A Change in Altitude, however, I found it difficult to wrap my head around the characters and the plot. The story opens with a young couple from the US who have decided to spend a year in Kenya. Patrick is a doctor and Margaret is attempting to find a job and, it seems, to find herself as well. After being robbed and having numerous problems assimilating into a foreign society, they find themselves living in a cottage owned by a British couple who live in the neighbouring house. These two couples, along with some others, decide to climb Mount Kenya and results are tragic. In the aftermath, Patrick and Margaret’s relationship suffers a great deal and Margaret struggles to truly understand herself.

I think what I found difficult about this novel is the lack of engaging characters in the novel. I just couldn’t find a personal connection with any of them. Margaret is the central figure in the novel and, while I had hoped to find I cared about what happened to her, I just did not find myself developing any type of sympathy for her character.

It isn’t often that I feel badly when I finish reading a novel but this time I truly do – I really wanted to like this novel because I had enjoyed The Pilot’s Wife by Shreve so much! If you are interested in the backdrop of 1970s Africa (which does hold some interesting elements in the relationships between the local African people and those who come with money and power) or you are a loyal fan of Shreve’s work, I would recommend this book. Otherwise, this may not be the book for you.