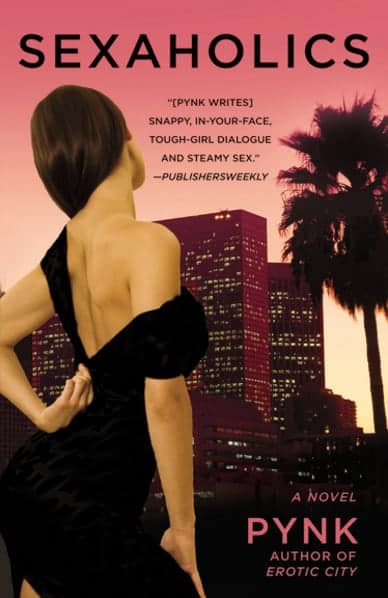 Miki, Valencia, Teela Raye, and Brandi share one thing…they are all addicted to sex. United through Sexaholics Anonymous, these women try to recover from their dependence on wild, spontaneous, and even sometimes, dangerous sex. From whips and chains, to sex in public, they have done it all! Led by Dr. Rachel Cummings, each woman takes the first step to recovery by sharing her biggest sexual act with the group. SEXAHOLICS takes readers through the outrageous experiences of four women on their long path to success.

I knew what I was getting into when I agreed to review Pynk’s Sexaholics.  I had no illusions as to what type of book this would be.  Yet I was still taken by surprise.

Sexaholics tells the tale of four women with insatiable appetites for sex.  Sex with men, with women, with strangers, with friends, you name it.

It’s a well-written novel with an unbelievable amount of sex.  Unbelievable.  I cannot stress that enough.  In fact, there are times when sex scenes are overwhelming; it’s one after another, with just a little dialogue peppered in to break it up. Sexaholics is not for the meek.  It is intense, to put it simply.  The sex is raw and real; you’re not going to get the flowery descriptions that you’ll find in Harlequin.  Not here, sister.  The sex scenes are filthy.  Really filthy.  That’s not a judgment call; it’s just how it is.

I can’t honestly say that there was much of a plotline, at least not one that you’re used to in a novel.  There are four women with sex addiction.  They have relationship issues and work issues, but the conflict and obstacles they face are borne out of their issues with sex.  Coincidentally, each of them is attending Sexaholics Anonymous meetings — although, considering none of them have curtailed their behavior (not to mention one who went home with a man she met in the meeting), it doesn’t appear that they’re having much luck with recovery.

If you’re not shy about sex (actually you better be pretty open-minded), then you will enjoy this book. I definitely did; I actually read it in under a day.  This type of novel was new to me, and while it has a very specific audience, it was a good read.