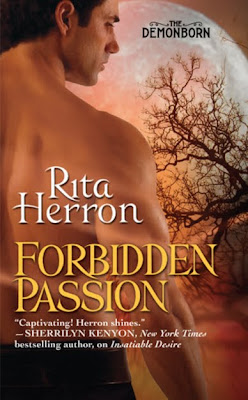 SHE SEES HIM IN HER DREAMS…

Fueled by her family’s murder years ago, Dr. Marlena Bender has devoted her life to understanding violent criminals. But when a serial killer in this small Southern town starts taking the lives of women in diabolical ways–leaving trophies of his kills on Marlena’s doorstep–it all hits too close to home. Terrified, Marlena turns to the only man she can trust…the man who saved her life.

BUT HIS SECRET IS HER WORST NIGHTMARE.

Sheriff Dante Valtrez would move heaven and earth to keep Marlena safe, but he’s not the savior she thinks he is. A dark legacy runs through his blood and a dangerous secret lies within him. Now a fierce, hot, ruthless desire draws Dante and Marlena together–as a demonic force from his past threatens to rip them apart, destroying everything they hold dear.

This is an amazing and captivating paranormal romance. I was riveted the moment I opened the first page. The characters were a little hard to connect with because they both could be so loving one minute and so cold the next. They would have been a little more enjoyable if they had been a little less stubborn to one another. Marlena was really stupid at times wanting her independence to the point that she could easily have died; she should have let her heroine protect her. The storyline was different than anything I have read before, and I found it refreshing. I liked that we learned a little bit about the underground world of demons. It was fascinating. At the same time, I liked that the serial killed had the demon side and the humanity side. It added a complexity that I enjoyed. I liked the ending for the most part but I didn’t feel like it fit the Marlena character that we see throughout the novel. I can’t go in depth about it without giving away the ending.

It was a dark and stormy night when Rita Herron penned her first book–at age twelve. A dark and stormy night because she didn’t think real people grew up to be writers, so she put her dreams aside and earned a teaching degree instead. Ten years later, she traded her chalkboards for a computer and now she writes so she doesn’t have to get a real job. Having written over fifty books to date, this multi-award winning author and mother of three spins spine-tingling, paranormal romantic suspense stories that she hopes keep you up at night.

Heather is a full time mom of 2 little boys (so far). She spends her days reading, writing, blogging, playing under the sun while also being mother and wife. She loves her life with her family in beautiful Charleston, SC.