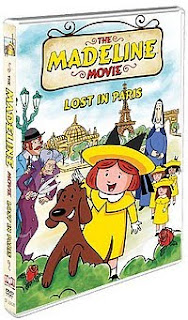 She’s captured millions of hearts and been adored by every generation — now Madeline stars in her first animated feature! Inspired by the beloved classic books that introduced us to a dozen delightful girls who live in an old house in Paris covered with vines, The Madeline Movie: Lost In Paris is full of spirited fun and five “fantastique” new songs.

When a long-lost uncle from Vienna pays a surprise visit, Madeline’s dreams of family life seem wonderfully fulfilled — until she finds herself in the middle of an unfortunate scheme. Madeline then must call upon all of her courage and cleverness to foil an evil plot to take her from the only family she’s ever known. Join Madeline, Miss Clavel, Pepito, 11 school friends, and her ever-so-smart dog, Genevieve, in a thrilling Paris adventure you won’t want to miss, where everyone learns the true meaning of family!

Both Olivia and Bridget have watched Madeline on TV in the past so I am somewhat familiar with the show. However, this was the first time I ever actually sat and watched it from start to finish. It was really cute and I enjoyed watching it. Even John sat and watched it with me. My girls are with their dad right now while he gets ready to go overseas, but are looking forward to watching it when they come here.

It has an easy to follow storyline that will keep kids interested and entertained. Bridget will like the songs in the movie and if she watches it enough times she will learn the words and be able to sing along. I can’t wait for her to see it. Olivia may be a bit old for it as she will be 12 this year, but Bridget at 5 years old is the perfect age.

I am a fan of Christopher Plummer since his days as “Doc” in Back to the Future so it was great to “see” him in the movie. Overall, this is a cute movie to be enjoyed by the whole family especially the little ones. 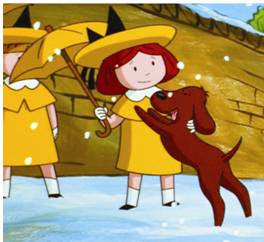 The Madeline Movie: Lost in Paris is released in stores on April 13th so make sure you pick up a copy!