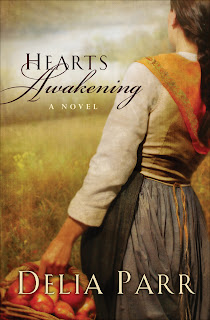 Life has left few choices for Elvira Kilmer. Her hopes for marriage and a family of her own have long since passed her by, and her arrival on Dillon’s Island, nestled in the Susquehanna River, is not of her choosing, either. She needs work. And Jackson Smith needs a housekeeper.

Yet Ellie never imagined the widower would be so young… so handsome.

Jackson, on the other hand, has never met anyone quite so… plain. But he quickly comes to realize that Ellie’s presence may solve his own problems–both the rearing of his young boys and the scandal that surrounds his first marriage.

When Jackson offers her something quite out of the ordinary, will Ellie look beyond mere necessity and risk opening her heart?

Heart’s Awakening is a historical romance/fiction novel. I loved it right from page one and found myself identifying in some ways with the main character Ellie. She is a young woman in her 30’s who is considered a “spinster” and is quite unlikely to find someone to marry her. She meets a man named Jackson who is a single father of two young boys… her cousin has sent her there to help him with the kids and to take care of his home and the “motherly duties” that were expected back in the 1840’s {when this novel takes place.}

Ellie and Jackson seem to me to both be people living on the edge. It’s almost like if one more bad thing happens to either one of them they are going to lose it and you can really feel that tension as you read the book. Jackson’s young sons are in turmoil as well over the loss of their mother and having someone new come in and manage their lives.

Without giving too much away, all I will say is Jackson decides a marriage of convenience is in order and Ellie agrees because she figures she has nothing better on the horizon and the story that ensues is both heartwarming and fulfilling in some way.

If you love a good historical romance, then this is the book for you and I would highly recommend it. It’s easy to read and somewhat predictable, but just different enough to keep you wondering and reading to the end.

Vicki is a single woman living in Nova Scotia, Canada who loves to read, sing, cook for her friends and family and scrapbook. She loves to keep busy, hang out with her boyfriend and his cat and only sits still long enough to read and review books for "Simply Stacie."