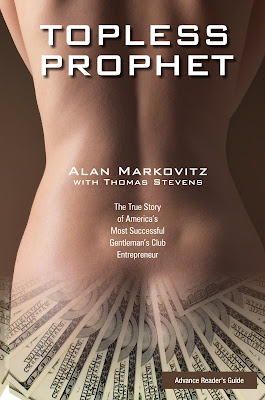 With all that we hear about the Tiger Woods sex scandal..or David Letterman..or any politician’s sex life there is one thing to keep in mind: sex is natural and men can’t help but want to experiment and vary up their sex lives. However, I don’t condone cheating. But I have found that clubs like mine (Penthouse Gentlemen’s Club in Detroit and Philly) allow guys to see beauty up close but not cross the line. I share a lot of humorous stories of what it’s like to work at a club, manage and hire the girls, date some of them, and to be a leader in a controversial industry. Check out my book, Topless Prophet: http://clients.plannedtvarts.com/epk/topless-prophet

About the Book- Topless Prophet by Alan Markovitz:

One man’s story of what it takes to run a strip club empire  the dangers, secrets, pitfalls, surprises and rewards and the business lessons learned.

What is it really like to open and run a successful string of strip clubs?

It’s not at all what you think it is, confides Alan Markovitz, author of a new book and owner of the nation’s leading gentlemen’s club.

Topless Prophet: The True Story of America’s Most Successful Gentlemen’s Club Entrepreneur offers a rare glimpse into the world of gentlemen’s clubs, taking us behind the scenes of the operations of one of the nation’s most successful club owners. Where other books provide insight on the scandalous side of strippers, escorts, and x-rated entertainment, Topless Prophet is as much a business book and autobiography of an ingenious entrepreneur as it is an exploration of what goes into staying on top of an industry filled with cut-throat competition, corruption, celebrities, and beautiful women who make a living dancing.

Alan Markovitz, who owns several Penthouse Gentlemen’s Clubs and the country’s No. 1 ranked adult entertainment club (The Ultimate Strip Club List (www.tuscl.net), The Flight Club, Topless Prophet chronicles a first-hand account of a Detroit businessman who has helped change and grow an industry while overcoming many challenges, some life-threatening, some business-endangering. He has spent nearly the past three decades reformulating the ultimate fantasy setting for men.

Markovitz overcame many unique circumstances, including when he:

Had to testify against the Mafia when they threatened him.
Saw his club raided by the police as part of a smear campaign by a competing Eight Mile club owner â€“ and spent the weekend in jail.
Was shot by one of his own dancers after he fired her.
Saw his dancers try to unionize to block a new compensation system.
Had one of his clubs tank after the local city (Ft. Lauderdale) changed the laws about alcohol being served in strip clubs.
Was blocked by political cronyism when he tried to open in Las Vegas.
Got sued for trademark infringement by Boeing.
Was accidentally shot by a drunken patron, an off-duty police officer.
Had his father, a Holocaust survivor who became his business partner, negotiate with a menacing biker gang that threatened his first club.

The business of entertainment has a lot of glamour and glitz and beautiful women for sure — but it’s filled with many forces that can challenge and chew you up in no time, says Markovitz. The key is to think ahead, exceed expectations, be ready for a fight, and be wise enough to know when to walk away.

Markovitz’s story begins with humble roots growing up in the Jewish middle class neighborhood of Oak Park, Michigan, the son of a television repair shop owner. He starts out like a kid in a candy store, working the bar for the neighborhood strip club as a teenager. Markovitz befriends the owner and seeks him out as a business partner when he ventures out to buy his first club at age 22. From there on he comes back stronger from every challenge, crisis, or adversity he faces along the way to establish himself at the top of the topless business.

Topless Prophet also shares Markovitz’s personal experiences, professional insights, and vision for the future of adult entertainment. He reveals just what it is about the allure of the dancers that captures men’s hearts and wallets. He tells us if customers really have a chance to date a dancer and discusses how he romanced some of the dancers. He also shares how one unhappy ex-girlfriend/stripper drove her car into his club looking for blood.

Markovitz shares many insights about how to be successful in business, and admittedly bares mistakes made along the way as well. He explains how he:

Moved the strip club experience from a blue-collar to white-collar audience.
First discovered moving dancers off the stage to tables and then customers laps and went from paying his dancers to having them pay him.
Had to work alongside a business partner who hired two hit men to kill him.
Manages over 300 dancers at each club.
Attempted to bring the strip club setting to airplanes and golf courses.
Got swindled out of a million dollars when trying to buy a club.
Views expansion, upgrades, location, quality of service, the competition, pricing, and knowing when to wage a legal fight.

The formula for success is fleeting, says Markovitz. Just when you think you know what it is, it changes. You can’t be complacent in this business. Markovitz certainly knows what it takes to make millions and have fun doing it.