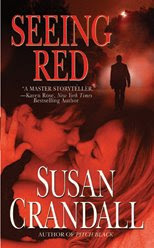 Category: FICTION, ROMANCE
Format: MASS MARKET
Publish Date: 2/1/2009
Price: $6.99/$8.50
ISBN: 9780446178570
Pages: 432
From the Publisher:
Ellis Greene remembers very little about the night of her cousin Laura’s murder, but she does recall the face of the murderer. Ellis was the key witness to the crime, and her testimony helped put Hollis Alexander in jail for a long time. With Hollis behind bars, Ellis should feel safe, but the memory of that awful night still haunts her. Determined to free herself from the fear of being attacked like her cousin, Ellis has become an expert in self defense. However, when Ellis hears that Hollis has been paroled, she feels like a helpless teenager again–and she isn’t the only one who notices that he’s free.
Laura’s boyfriend Nate was one of the prime suspects for her murder. After the court case, many still believed that Nate was guilty and he left town to reinvent himself. Now, fifteen years later, he has returned to protect Ellis from suffering the same fate as her cousin. As soon as Ellis and Nate see one another, sparks fly. But Ellis hasn’t let herself fall for a man in a long time, and she isn’t sure whether she can trust Nate. As Laura’s murderer zeroes in on Ellis as his next target, she must fight to stay alive while she finally discovers her true feelings about Nate.

This was my first book that I read by Susan Crandall and I have to say I was impressed with her writing. She is very good at telling the story and captivating the reader. I liked how she ended each chapter with a cliffhanger that made you want to keep reading to find out what happens next.
She is very descriptive and I could easily picture what the setting looked like. She had good character development for the main players- Ellis and Nate. I thought they made a great couple and she did a really good job at capturing the chemistry between the two of them. If I were Ellis, I would be attracted to Nate too!

The storyline was suspenseful and left most of the twists to be found out towards the end of the book. Hindsight looking back, I can see the clues that the author left to hint at who the killer was, but I didn’t pick up on it while I was reading! I also think this book would make a good movie.
Overall, I liked Susan Crandall’s writing style and think she is very talented at captivating my interest. The romance was awesome between Nate and Ellis and in parts, I did really feel for both of them. I would recommend this book to anyone who likes both suspense and romance.
Thank you to Hachette Book Group for the opportunity to read this book!
Rating: 4.8/5