Free E-book | The Ruins of Gorlan by John Flanagan 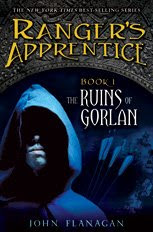 I was contacted by Penguin Young Readers Group who are running a special promotion until February 15th. They are offering a free download of Book One of The Ranger’s Apprentice Series called “The Ruins of Gorlan” by John Flanagan in eBook format. This looks like a great series for Fantasy fiction lovers. I’m going to download it and give it a try since I always enjoy reading new authors to keep life interesting!
Book Synopsis:
They have always scared him in the past-the Rangers, with their dark cloaks and shadowy ways. The villagers believe the Rangers practice magic that makes them invisible to ordinary people. And now 15-year-old Will, always small for his age, has been chosen as a Ranger’s apprentice. What he doesn’t yet realize is that the Rangers are the protectors of the kingdom. Highly trained in the skills of battle and surveillance, they fight the battles before the battles reach the people. And as Will is about to learn, there is a large battle brewing. The exiled Morgarath, Lord of the Mountains of Rain and Night, is gathering his forces for an attack on the kingdom. This time, he will not be denied. . . .
Find out how the adventure begins – but hurry! Read The Ruins of Gorlan, book one of the New York Times best-selling Ranger’s Apprentice series FREE for a limited time (1/15-2/15)!
posted in Books
0 Comments »